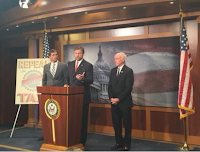 The following is the official statement of Teamsters General President Jim Hoffa in response to the announcement of the introduction of a bipartisan companion bill in the Senate to HR 2050 which would repeal an excise tax set to be charged on those enrolled in high-quality health care plans provided by the Teamsters and other organizations.

“The Teamsters support this bipartisan effort to repeal the destructive excise tax that is set to take effect in 2018. This tax will levy a heavy burden on working families that they cannot afford. It is unacceptable that hardworking Americans are being penalized for having a quality health care plan.

“We must repeal this tax and protect middle-class Americans from additional economic hardship before it takes effect. I applaud Rep. Courtney and Sens. Heller and Heinrich for joining together to present a bipartisan effort against this ill-advised tax.”
Posted by 1Teamster at 1:53 PM