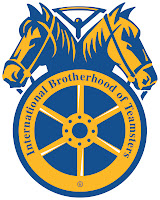 Teamsters across the country are applauding President Barack Obama's signing into law today of the Military Commercial Drivers' License Act of 2012. The demand for qualified, safe truck drivers has risen over the past few years and the new law will make it easier for veterans and service men and women to obtain Commercial Drivers' Licenses, making them more employable once they leave active-duty.

"With construction projects ramping up there is an increased need for safe, dependable truck drivers with CDLs," said Jim Hoffa, Teamsters General President. "Through our work with the Teamsters Military Assistance Program and Helmets to Hardhats, we know that our active duty military and veterans are valued for their military training, making them sought-after candidates for freight and construction work."

The law will enable an active duty service man or woman to go through the training and skill acquisition necessary to obtain a CDL while they are performing their duties in service to the United States. The fact that they may be serving in a state other than their home state will no longer be an obstacle.

"We support this legislation," said Marion Davis, Director of the Teamsters Building Materials and Constructions Trades division. "Our goal is to support the transition of military personnel to civilian life. We will continue the necessary training to assist veterans and active duty military personnel in becoming safe and confident drivers."