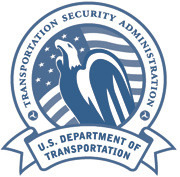 Teamsters Head to the Hill to Fight for Drivers' Rights

The International Brotherhood of Teamsters took a stand for drivers' rights at a hearing held by the U.S. House of Representatives Highways, Transit and Pipelines Subcommittee on May 11, to discuss the current process for hazardous material endorsement background checks. Full story here............http://www.teamster.org/05news/nr_050512_1.htm
Posted by 1Teamster at 10:14 PM No comments: 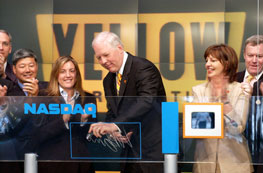 Bill Zollars
Posted by 1Teamster at 11:26 AM No comments:

Yellow Roadway Corp. on Thursday said it more than doubled first-quarter profits, beating Wall Street predictions, as it saw record revenues in all of its trucking and logistics divisions. For the three months ending March 31, the Overland Park, Kan.-based company reported earnings of $48.89 million, or 96 cents per share, compared with $18.16 million, or 38 cents per share, in the same quarter a year ago. Excluding money it made from disposing of property, Yellow Roadway had earnings of 92 cents per share. Analysts surveyed by Thomson Financial expected earnings of 91 cents per share. Revenues for the quarter increased 8 percent to $1.68 billion. "Our first quarter results reflect the strong and sustained performance of all of our operating compani! es supported by a good economy, cost synergies and firm pricing," Bill Zollars, Yellow's chairman, president and chief executive officer, said in a written statement. Results were released after the market closed Thursday, but Yellow shares closed up $1.95, or 3.9 percent, to $51.81 on the Nasdaq Stock Market. They fell $1.41 cents, or 2.7 percent, in after-hours trading. Yellow shares have been trading at a 52-week range of $32.01 to $64.47. The results came against a backdrop of fuel price hikes and slowing shipping demand, which have tripped up other freight haulers, including USF Corp., the company Yellow plans to acquire later this year. Chicago-based USF said two weeks ago that a slowdown in the auto industry and competition elsewhere in the country would push earnings to between 12 cents and 16 cents a share, far below analysts' estimates of 38 cents per share. USF will report first quarter results Friday. Yellow's three trucking divisions showed strong growth from the prior year. Yellow Transportation earnings increased 71.7 percent to $46.2 million on revenues of $791.2 million; Roadway Express profits more than doubled to $36.5 million on revenues of $766 million; New Penn Express earnings increased 39.6 percent to $8 million on revenues of $65 million; and the company's Meridian IQ logistics business reported earnings of $1.03 million on revenues of $56.4 million. The company said it continued to expect annual earnings between $5.10 and $5.30 per share, including a 29-cent dilution from convertible securities, and second quarter earnings between $1.25 and $1.35. Those expectations don't include any impact from the USF merger.
Posted by 1Teamster at 11:21 AM No comments: 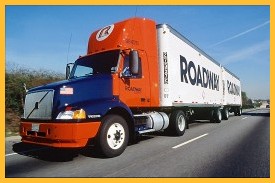 Roadway's sponsorship of “Times of Greatness”

The legends of Negro League baseball, most of them long gone, came alive inside a posh moving van-turned traveling museum that rolled up outside the stadium parking lot for a one-night visit.

The van, custom-fitted with touch-screen displays, vintage movie clips and dazzling uniform display cases, was on the third stop of a nationwide tour to rekindle the history of the old Negro Leagues, which were founded in 1920 and began to fade after World War II when Major League Baseball finally allowed Blacks to play."For a lot of folks, particularly for our young people, this will be their first introduction to the fact that there was even a Negro League," said Bob Kendrick, marketing director for the Negro League Baseball Museum in Kansas City, which is co-sponsoring the tour with Roadway Express Inc.Titled "Times of Greatness," the exhibit reminds fans that Robinson played in the Negro Leagues long before he became the majors' first Black player. It highlights the legendary career of Paige, the Hall of Fame pitcher who spent 21 years in the Negro Leagues before making his major league debut at age 42, and chronicles Doby, the first Black to play in the American League. It tells the story of Manley, one of the first female owner-managers of a professional sports team, who fought for better schedules, better travel and better salaries for her players."When we make these stops, the common reaction is: 'I didn't know that,' " Kendrick said. "What Roadway has done (is) wet (fans') appetite so they will want to make plans to come to Kansas City." For more information, check http://www.roadway.com/baseball/times_of_greatness.html
Posted by 1Teamster at 12:14 AM No comments: 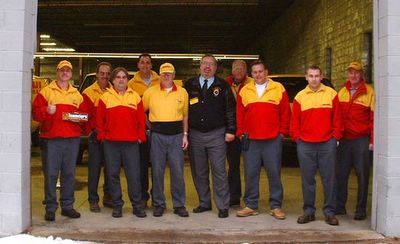 Workers at Great Plains Transportation Inc., an area contractor for express delivery firm DHL, voted to unionize last week.
Great Plains becomes the first area company to be touched by the Teamsters' national campaign to organize firms that contract with DHL, the giant delivery company owned by Deutsche Post. Another election is scheduled on May 20 at Mid-Continent Transport, a DHL contractor in St. Joseph.
With 32 eligible employees at Great Plains, 23 voted in favor of joining Teamsters Local 41 and three voted against, according to Dan Hubbel, assistant to the regional director of the National Labor Relations Board.
Alonzo White, owner of Great Plains, could not be reached for comment Friday. A union official said he did not expect the company to contest the election, which was conducted by the NLRB.
“I don't think there will be any objections,” said Mike Corns, a Teamsters national organizer. “I think this one was pretty clean.”
Corns said the margin of victory was indicative of employees who are frustrated by low wages, unaffordable health benefits and excessive overtime.
“It sent a clear message that their workers want to make a change,” he said. “Hopefully, negotiations on a contract will start right away. The local will be pursuing that pretty aggressively.”
Hubbel said the NLRB is continuing to investigate the union's charge that a Great Plains employee was fired for engaging in union activity. A ruling should be forthcoming, he said.
Corns said the results at Great Plains gave the union hope about the upcoming vote in St. Joseph. Mid-Continent Transport has about 30 drivers and dock workers who will be deciding whether to join Teamsters Local 955.
Corns said management at the St. Joseph firm has been aggressive in trying to persuade its employees to vote against the union.
The Teamsters have said more than 1,300 workers at DHL contractor firms around the country have voted to join the union. In late April, 66 employees at three delivery companies in the Miami area voted in favor of forming a bargaining unit.
Posted by 1Teamster at 9:13 AM No comments: 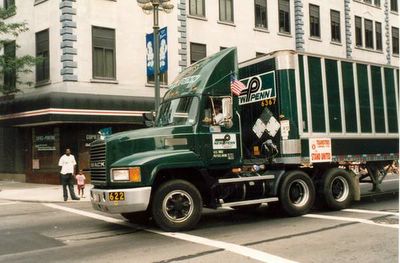 Looks like to be a main player in LTL your tracking technology must be current and real time. Seems tracking is as important as pickup and delivery. New Penn Introduces NP-Connex.........http://www.newpenn.com/npweb/frame.txt/input?location=http://npweb1.newpenn.com/pr.nsf/view?OpenForm
Posted by 1Teamster at 10:09 AM No comments: