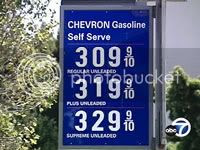 "We work for the shareholders. Our job is to go out and make the most money for those people.We're in the business to make money."

Rex Tillerson's honesty is shocking and refreshing in today's culture of corporate greed and lying executives. If only we could get chief executives to be smart and honest!

With gas prices hovering around $3 a gallon and experts predicting more increases over the summer, working families are being squeezed yet again.

Teamster Mike Gluba, 45, commutes about 10 miles roundtrip each day from his home in Taylor to his job at Hertz Rent A Car at Detroit Metropolitan Wayne County Airport. The drive used to cost him $15 a week in his eight-year-old Ford van. He now pays $35.

"It's becoming such a struggle," says Gluba, who earns about $40,000 a year. "I work my butt off at Hertz, but the 50 cents an hour raise I got this year just doesn't come close to keeping up with gas and other costs. If I didn't have a union, I'd be in bad shape."

Salary.com, an online compensation analyst, found that an average American worker like Gluba spends 3.3 percent of his salary on gas to commute roundtrip to work. In places where gas prices are higher, like here in Detroit, some commuters are already spending 4.6 percent of their salary on gas.

With inflation increasing faster than wages, 3.3 percent versus 2.9 percent, according to the Bureau of Labor Statistics, increasing gas prices are eroding whatever minimal wage gains workers are seeing. And companies hit by high fuel prices will start cutting deeper into workers' wages and benefits.

Despite this, neither gas company executives nor the federal government seem to care.

All Tillerson and his oil buddies seem to care about is the bottom line. His predecessor got paid an average of $144,573 a day and, when he left, he got a $98 million pension check. Last year, gas and oil companies made record profits. Sounds like price gouging to me.

The gas companies seem to have forgotten that workers are also consumers. They continue to let greed serve as their modus operandi for running their companies.

But workers are fed up with these abuses. Almost 81 percent of Americans say they think the chief executives of large companies are overpaid, according to a Los Angeles Times/Bloomberg survey conducted in February.

That's why we are fighting back in a way that CEOs understand -- we are taking our fights to the board room, using our power as shareholders to rein them in. Shareholder resolutions on executive compensation are gaining traction at shareholder meetings.

The Teamsters recently won our resolution empowering Coca-Cola Co. shareholders to approve all severance package agreements that amount to 2.99 times the annual salary plus bonus.

And we're ready to show our elected officials who are letting this crisis happen know how we feel about them too.

Gluba, like many Americans, blames the president. A national CBS News/New York Times poll this week found that 87 percent of Americans disapprove of how President Bush is handling the gasoline issue. And the public quickly shot down the Republicans' recent $100 hush money offer -- I mean rebate offer.

Since the president won't lift a finger to give Americans relief at the pump, Congress should immediately repeal oil and gas tax giveaways to energy companies worth more than $10 billion over the next five years. House and Senate Democrats have rightly called for a windfall profit tax on oil firms that avoids taxing exploration and development of new production.

In addition, Sen. Robert Menendez, D-N.J., has proposed suspending the federal gas and diesel taxes for 60 days, which would reduce the price by 18 cents a gallon for gas and 24 cents a gallon for diesel. Taxing the surging oil profits will easily make up the lost revenue.

The gas crisis may be the straw that breaks the camel's back, creating a mass uproar over the ever-growing disparity between the haves and the have-nots. There is power in solidarity, and working families have the numbers.
Posted by 1Teamster at 10:16 AM No comments:

Arkansas Best Corp., a transportation holding company whose largest subsidiary is ABF Freight System Inc., on May 9 reached an agreement in principle to sell its non-asset based intermodal marketing unit Clipper Express for approximately $20 million. The buyer is Bluenose Holdings Inc., a division of Wheels Group, of Mississauga, Ontario. The agreement is subject to the negotiation of definitive terms and to the arrangement of financing, according David Humphrey, Arkansas Best’s director of investor relations.

Arkansas Best expects to close the deal in the third quarter of 2006, and the final purchase price will be based on balance sheet adjustments as of the closing date, Humphrey explained in an e-mail response to an inquiry by The Trucker.

“We’ve been exploring options regarding Clipper for awhile,” Humphrey said. “Wheels Group is a Canadian company that is in a similar business, in Canada, as Clipper.”

Clipper currently represents less than ten percent of the total revenues of Arkansas Best Corporation. Following the sale, Clipper’s results of operations will be reported as discontinued operations in the parent company’s consolidated financial statements.

Humphrey’s explanation followed an announcement of the sale earlier in the day by Arkansas Best president and CEO Robert Johnson, speaking at the Bear Stearns Global Transportation Conference in New York.
Posted by 1Teamster at 11:00 AM No comments:

YRC Worldwide
Inc., formerly known as Yellow Roadway Corporation, has successfully
implemented Taleo Verify(TM). Powered by Verified Person, the industry's
most advanced source for employee screening and offered by Taleo
Corporation, the leading provider of talent management
solutions, Taleo Verify can be used for pre-employment searches of public
and private information as well as ongoing scans for new criminal
infractions that raise red flags.
YRC Worldwide is one of the largest transportation service providers in
the world and one of Fortune's most admired companies. With 70,000 global
employees, cost-effective, accurate and timely background checks are an
integral component to a comprehensive corporate security strategy.
"We plan to conduct nearly 20,000 background checks this year alone,"
said Mike Hofer, HR Project Manager, YRC Worldwide. "With this level of
volume, we need a solution with scope and speed from a provider who passes
the cost- savings generated by efficiencies to customers."
Taleo Verify is completely integrated with Taleo Enterprise, enabling
YRC Worldwide to hardwire background checks into the employee lifecycle.
Taleo taps Verified Person's comprehensive database and expansive court
runner network to deliver turnaround times that are 40 percent faster than
the industry average, drive down costs and increase accuracy, specifically
reducing frustrating false positives and negatives that breed negligence
lawsuits.
"Interesting times call for innovative solutions," said Tal Moise, CEO
of Verified Person. "With Taleo Verify, YRC executives can rest assured
they are using the latest employee screening tools available in the
marketplace today to mitigate risk."
Posted by 1Teamster at 12:09 AM No comments: