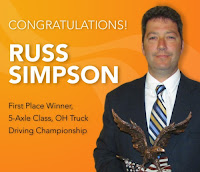 Holland professional driver Russell Simpson took the top award at the 2013 Ohio Truck Driving Championships, winning first place in the 5-axle class. The competition was held May 4, 2013, at the IX Center in Cleveland. It included more than 150 contestants from 24 companies across the state. The competition recognizes drivers who demonstrate exemplary safety focus, equipment awareness, and driving skills. His win qualifies Simpson to compete at the National Truck Driving Championships (NTDC) which will take place August 20-24 in Salt Lake City, UT.

"Russell is the epitome of everything that makes Holland great," said Scott Shaffer, Columbus Terminal Manager. "He approaches each day with enthusiasm and has one of the most positive and gregarious personalities I have ever worked with. Russell is a true professional, and I can think of no better employee to serve as the ambassador for Holland at the NTDC."

Simpson has competed in truck driving competitions since 2008, accumulating an impressive record. In his first year of competition, he earned the first-place prize in the 5-axle category at the Ohio Truck Driving Championship, and was also named Ohio Rookie of the Year. In 2009, he took fourth place in the tanker class, and just last year took second place in the 5-axle category. Simpson has been driving professionally for 27 years, 21 of which he has spent with Holland as a city driver out of the Columbus, Ohio facility.

When asked why he competes, Simpson said, "I really enjoy the competitions. I've met some great drivers and friends. More importantly, competing in these events is my way of improving my skills and showing respect for the company by giving back the best way I can."

"Safety in and of itself is always a top priority but drivers like Russ make Holland the industry leader it is today," said Scott Ware, Holland President. "His dedication to safety is also a commitment to service as he continually delivers his customers' shipments damage-free and on time," added Ware.

To qualify for state competitions, drivers must have a one-year accident-free record. First-place winners in each class earn an invitation to compete at the annual National Truck Driving Championships hosted by the American Trucking Association. This prestigious event, commonly referred to as "The Super Bowl of Safety" includes a written exam, pre-trip inspection, and driven obstacle course.

Listen to Jim Ferguson, Holland Vice President Sales & Marketing speak about the competitions, and watch Russ compete as well as provide his opening on the Holland YouTube channel.
Posted by 1Teamster at 11:31 AM No comments:

YRC Freight, a subsidiary of YRC Worldwide, moves forward with continuous improvements, implementing a change in operations which will deliver even greater service reliability and consistency across their network. The network changes enhance operational efficiencies by increasing network density, reducing shipment touches, and reducing the number of empty miles.

"Our primary goal is to provide our customers with consistent, reliable, damage-free service," said Jeff Rogers, president of YRC Freight. "The change in operations we are implementing today will give our customers an improved experience when they ship with us."
Posted by 1Teamster at 11:25 AM No comments:

“Our members’ number one goal was to protect their health, welfare and pension benefits and we achieved this despite all the financial challenges the company is facing,” said Gordon Sweeton, Co-Chairman of the National ABF Negotiating Committee for the Teamsters National Freight Industry Negotiating Committee (TNFINC). “We also protected good Teamster freight jobs.”

The union negotiating committee has unanimously endorsed the tentative agreement.

The Teamsters were able to defeat numerous attempted takeaways sought by the company, including major cuts to health, welfare and pension benefits.

The tentative agreement does call for a 7 percent wage reduction, but that will be entirely recouped by the fifth year of the contract.

“Nobody ever wants to see a pay cut, but in light of the company’s struggles and our desire to see the company survive, something needed to be done,” Sweeton said. “It is in our best interests, as well as ABF’s, that this company be given a chance to climb out of this deep recession so that our members’ futures are protected.”

On Thursday, Welch sent a letter to all of the Overland Park less-than-truckload carrier’s employees explaining the company’s thinking behind the attempted acquisition of the Fort Smith, Ark. based company, his thoughts on the “leak” and media reactions to the acquisition, and his reaction to the International Brotherhood of Teamsters statement, which called the company’s behavior arrogant and “unconscionable.”

Welch opened the letter by explaining that the company, its board of directors and executives have a fiduciary duty to grow profits and increase shareholder value, and because of that they “spend a lot of time discussing strategic options” that can strengthen YRC.

He then said he met with Arkansas Best CEO Judy McReynolds for a total of one hour on March 22, sent a follow up letter to McReynolds on March 25, and received a letter rejecting the offer on April 1.  Full Story......