Thoughts are mixed at the local level about the effect of Thursday’s (Mar. 3) announcement that the U.S. and Mexico would implement long-delayed cross-border trucking provisions of the North American Free Trade Agreement.

According to a statement from the American Trucking Associations, the agreement upholds previous requirements for Mexican trucks operating on U.S. highways. The most talked about provision of the agreement requires that Mexican-based trucking companies receive authority to operate in the U.S. from the Federal Motor Carrier Safety Administration. To receive the FMCSA approval, Mexican trucks must “meet the same safety standards as U.S. fleets and that those trucks are prohibited from hauling freight between destinations within the United States,” noted the ATA statement. Full Story...........
Posted by 1Teamster at 11:07 AM No comments:

"This deal puts Americans at risk," Hoffa said. "This agreement caves in to business interests at the expense of the traveling public and American workers."

The Obama administration closed the border to unsafe Mexican trucks in February 2009 after Congress shut off funds for the cross-border pilot program. Mexico retaliated with tariffs that are excessive. The Teamsters believe the administration should have brought a challenge against Mexico for imposing excessive tariffs on U.S. goods, as the Teamsters Union has urged for nearly two years instead of agreeing to open the border to unsafe trucks.

Hoffa questioned the rationale behind this decision at a time of persistent high U.S. unemployment, budget deficits and unrelenting drug violence in Mexico. He said the proposed program would threaten the traveling public in the U.S. and open our southern border to increased drug trafficking.

"I am strongly opposed to this agreement," Hoffa said. "Why agree to a deal that threatens the jobs of U.S. truck drivers and warehouse workers when unemployment is so high? And why would we do it when drug cartel violence along the border is just getting worse?"

Ciudad Juarez, which is right across the border from El Paso, is now the most dangerous city in the world. The administration's own Homeland Security Department issued a warning in December 2010 that noted Texas safety officials urged people to stay away from Mexico.

"The warning comes as kidnappings, violence between drug cartels, as well as between law enforcement and the cartels, increases," Homeland Security said.
Further, a Homeland Security incident report from Oct. 15, 2010 indicates that drug traffickers have been known to hijack and clone legitimate trucks to transport illicit cargo across the border. According to the document, criminals hijacked over 10,000 commercial trucks in 2010 in Mexico.

Hoffa noted that the trade agreement benefits Mexico but not the United States. "Given the drug violence, there's no way a U.S. company would want to haul valuable goods into the Mexican interior," Hoffa said. "Trade agreements are supposed to benefit both parties, but this is a one-way street.

"We continue to have serious reservations about DOT's ability to guarantee the safety of Mexican trucks. Mexican trucks simply don't meet the same standards as U.S. trucks. Medical and physical standards for Mexican trucking firms are lower than for U.S. companies. And how can Mexico enforce highway safety laws when it can't even control drug cartels?

"The Bush-era pilot program was a failure that shouldn't be repeated," Hoffa said.
The U.S. government spent $500 million on the pilot program, which began in September 2007. Only about three Mexican trucks per day traveled beyond the border zone until the program was shut down, according to the Transportation Department's office of inspector general. The inspector general also reported that "FMCSA does not have assurance that it has checked every Mexican truck and driver … when they cross into the border in the United States."

"Why should American taxpayers pay for Mexican trucking companies to take away American jobs?"
Posted by 1Teamster at 10:51 AM 1 comment: 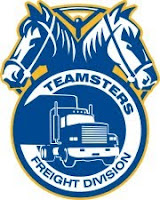 The Teamsters National Freight Industry Negotiating Committee (TNFINC) has approved a restructuring agreement that paves the way to save the jobs of 25,000 YRCW Teamsters and keep the company in business, Teamsters General President Jim Hoffa announced Monday, February 28.

Below are links to several documents, including:

A news release that was sent out February 28.

A one-page summary of the agreement in principle.
Posted by 1Teamster at 11:06 AM No comments:

Trucking company YRC Worldwide Inc. believes it has a new restructuring deal in place that will keep it in business.

The Kansas-based less-than-truckload operator, owner of the former Roadway business in Akron, has not released financial specifics of the plan.

But YRC executives said they have a nonbinding ''agreement in principle'' that will give the Teamsters union and YRC creditors significant additional ownership of the company as well as debt that can be converted into shares in upcoming years. Full Story.....
Posted by 1Teamster at 11:40 AM No comments:

TEAMSTERS APPROVE AGREEMENT WITH YRCW THAT PAVES THE WAY TO SAVE 25,000 JOBS

The Teamsters National Freight Industry Negotiating Committee (TNFINC) has approved a restructuring agreement that paves the way to save the jobs of 25,000 YRCW Teamsters and keep the company in business, Teamsters General President Jim Hoffa announced today.

The union reached the agreement in principle on terms for restructuring YRC Worldwide, Inc. with the company and the existing lending group. The terms of the agreement address key conditions—debt reduction and new capital—as set forth by the TNFINC in the Restructuring Plan/MOU and are designed to provide significant liquidity to YRCW to assure operational and job security for the company, its customers and its employees going forward.

“Protecting our members’ jobs and health care benefits has been our number one concern at YRCW as the company has struggled,” Hoffa said. “Since the Dec. 31 extension, we have been adamant about making sure an additional deadline did not pass without significant progress in YRCW’s restructuring efforts. We have some further analysis to do, and the details and definitive documentation need to be finalized, but there is now a clear pathway forward to a healthier YRCW.”

This agreement in principle contains two key points from the MOU announcement: 1) debt reduction and 2) new capital infusion from investors, while additionally providing the Teamsters with two seats on the company board of directors. The agreement in principle will also provide meaningful equity ownership in the company for Teamster YRCW members. The terms and conditions of this agreement are also predicated on the successful review of the company’s liquidity, financial projections and operational plan by the TNFINC and its advisors.

“When we negotiated, and Teamster YRCW members ratified, the Restructuring Plan/MOU in October, we made it clear that for those contract modifications to stay in place we had to have an important role in the restructuring and we had to verify that the terms would be sufficient for YRCW to operate without constant financial stress for the foreseeable future,” said Tyson Johnson, Teamsters National Freight Division Director. “We believe we achieved the best terms possible given the scope and scale of the challenges of the overall economy, in the freight industry and at YRCW. As we have stated before, our number one goal has been and remains achieving a restructuring at YRCW that creates a viable entity that continues to provide good jobs and benefits–and we believe this restructuring agreement puts us in the best position to achieve that goal.”

Pending the union’s continued review and approval of the effect of the AIP on the company’s liquidity and operations, the detailed documents need to be in place by April 29, 2011 and the closing of the transaction is expected to be no later than July 22, 2011.
Posted by 1Teamster at 3:21 PM No comments: