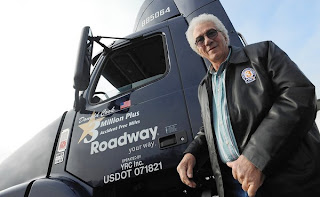 Don Cook's new leather jacket has a patch that says "Three Million Miles Safe Driving," and this is not an ambition but an achievement in his nearly four-decade career as a truck driver.

He has driven that far — the equivalent of 6.3 round trips to the moon — without an accident. Farther, actually, as he has driven many hundreds more miles since reaching the mark a few weeks ago.


He hasn't done it on big, lightly trafficked interstate highways of the South and West. No, Cook's routes take him into New England at the height of winter and, heaven help him, the New York-New Jersey metropolitan area, where driving is a mad and dangerous dash at any time of year.

"When you go across the George Washington Bridge, if they're driving like nut cases, you gotta do the same," Cook told me the other morning when I stopped at his workplace — the YRC Freight terminal on Brodhead Road in Bethlehem Township — to talk about his extraordinary stretch of safe driving.

For his success, YRC presented him with the jacket and with something a lot more substantial than that — a truck tractor of his own. It has his name on it and no one else can drive it. Trucking companies appreciate safe drivers, because they put a shine on the corporate reputation and, of course, preserve the bottom line. Even minor accidents can be expensive.  Full Story with Video.........

YRC Back at Brink 2 Years After Goldman Spat

Two years after the Teamsters union faced off against Goldman Sachs Group Inc. to keep YRC Worldwide Inc. out of bankruptcy, the second-biggest U.S. trucker is back on the brink.

Credit-default swaps tied to the company, whose units include New Penn, Holland and Reddaway, imply an 87 percent chance of default, according to data provider CMA. Bonds from Overland Park, Kansas-based YRC, which employed 32,000 on Dec. 31, have lost 50 percent of their value in six months.

Even as a strengthening U.S. economy boosts profits at FedEx Corp. and Con-Way Inc., YRC is set to lose $68.6 million this quarter, according to the average estimate of four analysts surveyed by Bloomberg, which would be its eighth loss in nine periods. Its competitors grabbed market share by lowering prices and attracting customers after YRC averted bankruptcy in 2009 through a debt exchange with a face value of $470 million. YRC’s revenue fell to $4.9 billion last year from $9.9 in 2006 while long-term borrowings rose.  Full Story.....