YRC Sees 'Momentum,' but Road Ahead Is Still Rough

YRC Worldwide sees 'good momentum,' as some major customers stick with it

YRC Worldwide, one of the country's largest trucking companies, on Friday posted an operating loss for the fourth-quarter because of the weak economy and internal financial struggles.

But the company said it sees "good momentum" in its business so far this year and is getting support from some big customers who have stuck with it. They include Toys R Us, Dole, Neiman Marcus and Anheuser-Busch. CEO Bill Zollars said other customers were scared off by concerns about the company's finances.

Some analysts thought the trucker was within days of filing for bankruptcy protection late last year. Full Story......
Posted by 1Teamster at 3:18 PM 1 comment:

YRC Worldwide Inc. today reported year-over-year and continued sequential improvement in its fourth quarter 2009 results. For the quarter ending December 31, 2009 the company announced pre-tax income of $50 million that included a net gain on note exchanges of $194 million, lease termination charges of $8 million related to further optimization of the YRC network, and severance charges of $3 million due to further headcount reductions. For the full year 2009 the company reported a pre-tax loss of $899 million compared to a full-year pre-tax loss in 2008 of $1,147 million, including impairment charges of $1,023 million. For the fourth quarter of 2008 the company reported a pre-tax loss of $353 million which included impairment charges of $200 million.

"We continued our positive momentum in the fourth quarter as we executed on our comprehensive plan. During 2009 we accomplished the integration and right-sizing of the national networks, the turnaround of the regional business, cost reductions and process improvements, a self-help liquidity program, and, most recently, the successful note exchange to conclude the year," stated Bill Zollars, Chairman and CEO of YRC Worldwide. "With our significantly improved balance sheet and additional liquidity resulting from our debt-for-equity exchange, we entered 2010 on a more solid financial base with good momentum."

Braun Racing is pleased to announce that their marketing partner of four years, ABF, is expanding their current racing program and will serve as primary sponsor of the No. 10 Toyota Camry for seven races in 2010. Jason Leffler will pilot the No. 10 ABF Camry in those races, listed below.

ABF has been a partner of Braun Racing’s since 2006, serving as an associate sponsor on the No. 38 Toyota Camry and as primary sponsor of the No. 10 Toyota on occasion. The company is pleased to have the opportunity to expand their racing program for 2010.

“ABF is excited to have Jason back behind the wheel of the No. 10 ABF Camry this year,” said Danny Loe, ABF’s Director of Marketing. “Jason carried the ABF colors in ABF Racing’s inaugural season back in 2006. We look forward to an exciting season and watching Jason contend for the 2010 driver’s championship.”

“We are very pleased to not only continue our partnership with ABF, but also to be able to grow the program for next season,” said Braun. “ABF has recognized that the NASCAR Nationwide Series is an excellent marketing platform for them to maximize brand awareness among their consumers, many of whom are NASCAR fans. We are excited to be a part of that in 2010.”
Posted by 1Teamster at 9:29 PM No comments:

ABF Freight System, Inc., has selected its 2010-2011 Road Team, consisting of the top driving professionals from across ABF's North American network. The ABF Road Team members and the ABF Service Centers where they are based are:

"This group of elite drivers represents the cream of the crop in the transportation industry," says ABF President and Chief Executive Officer Wes Kemp. "These professionals possess superb driving skills, outstanding safety records and a commitment to upholding ABF's standard of excellence. Thanks to the diligence of these employees, ABF has earned a reputation as the safest, most conscientious, highly innovative transportation provider in our industry."

During their 24-month term, ABF Road Team members serve as ambassadors for ABF and the trucking industry at large. Each member is available to address the vital role freight transportation plays in the global economy. When called upon, they speak on safety, the image of the truck driver and the industry, sharing the road with trucks, or other subjects of community or industry interest.
Posted by 1Teamster at 9:18 PM No comments:

United Parcel Service Inc. reported higher earnings, helped by much-improved margins, although revenue fell because of weakness in the U.S.

The shipping company also warned the first quarter would be the most challenging of the year, with profitability expected to be only slightly better than last year. Analysts were expecting a 13% per-share increase.

Atlanta-based UPS, viewed as a key barometer for global trade activity, benefited from a surge in shipping business as retailers and manufacturers restocked ahead of the late 2009 holiday season. The company has signaled the economy is improving, but last month also announced 1,800 job cuts and said it still expects the recovery to be gradual.

Operating margin surged to 10.2% from 6.3% as average daily volume was flat at 17.3 million packages but package volume rose 1.4%.

In the company's international packages segment, revenue rose 5.8% as average daily volume climbed 12% and profit increased 28%.
Posted by 1Teamster at 10:05 AM No comments: 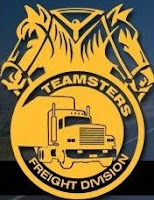 A group of dissident union workers employed by YRC Worldwide Inc. in Chicago has narrowly passed a proposal waiving the company’s pension obligations until next year.

The International Brotherhood of Teamsters’ Local 705 reported on its Web site Saturday that the final vote total was 178-142 in favor of the proposal.

Spokespeople for the local didn’t immediately return a phone call for comment Monday and a spokeswoman for Overland Park-based YRC said she was looking into the issue.

The concessions didn’t include an extra 5 percent wage reduction, which other union members accepted in August along with the temporary halt to pension payments.

The Chicago locals — the other is Local 710, which represents dockworkers — are among a handful of YRC’s union workers that operated under separate “white paper” bargaining agreements rather than as part of national freight industry bargaining. But on Nov. 24, the Teamsters General Executive Board passed a resolution ending that exemption for locals in the Chicago area. However, the board said the workers would keep conditions in their contracts that were better than the national contract.

YRC is in the midst of getting shareholders to approve issuing millions of shares of additional stock, part of a deal for the company’s bondholders to swap $470 million in debt for a 94 percent stake in the company.
Posted by 1Teamster at 7:20 PM No comments:

Goldman Sachs stopped making markets in bonds and credit default swaps (CDSs) on US freight company YRC Trucking for around two weeks from December 16, as part of an effort to stave off a public relations catastrophe.

The decision to stop quoting on YRC is understood to have been taken at a very senior level in Goldman, after freight union International Brotherhood of Teamsters (IBT) sent letters to congressmen, senators and state attorneys-general accusing the bank of encouraging investors to torpedo YRC's restructuring - which would have threatened the jobs of around 30,000 IBT members.

Goldman quickly threw its weight behind efforts to help the company stay on its feet, sourcing additional bonds for investors that wanted to vote in favour of the restructuring, which subsequently went through successfully. Full Story....
Posted by 1Teamster at 9:01 AM No comments: