The Teamsters Union submitted its comments to the Office of the U.S. Trade Representative (USTR) on the proposed renegotiation of the North American Free Trade Agreement (NAFTA). The union’s comments stressed the importance of the renegotiation focusing on long-standing issues that have existed in past and recently proposed agreements, including improving labor rights provisions, addressing currency manipulation and protecting highway safety.
The Teamsters Union believes that to successfully change U.S. trade policy from the flawed “free trade” approach that has undercut American jobs and industry for decades, to one that promotes fair trade, the USTR must prioritize U.S. workers, consumers and manufacturers.
“With these negotiations, the USTR has a real chance to set a precedent that will change how the U.S. approaches future trade negotiations moving forward,” said Teamsters General President James P. Hoffa. “We have seen the damage that NAFTA and free trade policies have done to our country for the past two decades. It is time to negotiate trade agreements that encourage job growth here in the U.S. while revitalizing our manufacturing industry.”
The union also called for the USTR to prioritize transparency during the negotiations and ensure that all stakeholders are included in the process from the beginning.
“As a member of the Advisory Committee on Trade Policy and Negotiations and the Labor Advisory Committee, I look forward to working closely with Ambassador Lighthizer to dramatically upgrade NAFTA,” Hoffa said. “The USTR must avoid making the same mistakes that occurred during the Trans Pacific Partnership negotiations by having a fully transparent and inclusive negotiation process.”
Posted by 1Teamster at 9:44 AM No comments: 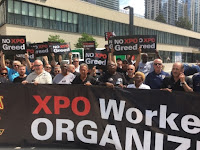 More than 100 Teamsters and supporters gathered to raise questions and demand answers to serious concerns about their employer XPO Logistics outside the 3PL & Supply Chain Summit today where XPO Logistics CEO Bradley Jacobs was speaking. Representatives of workers who have chosen the Teamsters demanded that Jacobs respond to workers’ concerns about sustainability of the company, mistreatment, pay disparity, company mismanagement and many other issues.

“While Jacobs received $20 million mega-equity, got approval for a $110 million stock-bonus plan and has received a 481-percent bump in pay in recent years, workers are denied affordable health care, have no retirement security and the company is stomping on their federally protected rights to form their union,” said Ernie Soehl, Director of the Teamsters National Freight Division. “Workers have demanded a meeting with Jacobs, which is why Teamsters are here today, but Jacobs continues to refuse to meet over serious issues with workers.”

Jacobs is hosting an event at the summit and workers and representatives want real answers to serious questions. Freight workers at six XPO locations and warehouse workers at one location have formed their union with the Teamsters despite the company spending hundreds of thousands of dollars on $3,000-a-day union busters. At the ports, XPO continues to misclassify port and rail drivers, which results in massive wage theft. In response, courts have awarded drivers in the millions of dollars, with no end in sight.

XPO is ramping up its anti-worker, anti-union tactics by illegally firing three freight drivers at their terminal outside Trenton, N.J. XPO shareholders recently rebuked Jacobs when a near-majority of outside shareholders opposed his “say-on-pay” measure. Workers want to know what the XPO end game is – will Jacobs sell as he has other companies?

XPO workers worldwide, the Teamsters and European unions, as well as the courts and lenders are coming together to expose XPO and Jacobs as the exemplars of corporate greed in the U.S.
Posted by 1Teamster at 9:40 AM No comments: