“This law is a shameful attack on people who care for us when we’re sick, rush into burning buildings to save our lives, clear snow from the roads during blizzards, come to our rescue when we’re in trouble and protect us from criminals in prisons,” Hoffa said. “It has nothing to do with fixing the budget or creating jobs. It’s union busting, plain and simple.”

Hoffa said Ohio Teamsters are organizing to collect signatures for a Citizens’ Veto of the legislation.

“Ohioans know SB 5 is nothing more than a political favor to bankers and CEOs who want to bust unions, cut wages and ship jobs overseas,” Hoffa said. “I’m confident that Ohio’s working people will go to the polls in November and kill this law.”
Posted by 1Teamster at 10:14 AM No comments:

Teamsters Take Part in National Day of Action on April 4

Teamsters Union Continues King's Legacy of Standing Up for Workers

On April 4, Teamsters will take part in a nationwide day of action to honor the legacy of the Rev. Martin Luther King Jr., while taking a stand in the ongoing struggle for workers' rights. More than 400 public events are planned, with a focus on education, outreach and solidarity with workers under attack by corporate-backed politicians in Wisconsin, Ohio and nationwide.

"From the beginning, Teamsters have led the charge for civil and human rights. Teamsters supported Dr. King and stood shoulder-to-shoulder with the civil rights movement to bring dignity to workers. Decades later our fight continues strong," Hoffa said.

April 4 marks the 43rd anniversary of the death of King, who was killed while defending Memphis sanitation workers' rights to bargain collectively.
"The night before he died, Dr. King said that all labor has dignity and it has worth," Hoffa said. "The Teamsters fought side by side with him for the dignity and worth of all working people, and we are still fighting. The battle for collective bargaining rights in Memphis 43 years ago is no different than our battles today in Wisconsin, Ohio, Michigan, Missouri and statehouses throughout the country."

Teamsters are asked to do their part on April 4 by making a promise to protect the middle class in four ways, including educating workers about the importance of the union; handing out informational materials on the importance of unions; sharing a special video about King and the Teamsters; and signing up for Teamster alert messages on anti-worker legislation.

For more information about Monday's events and how to participate, visit www.teamster.org or www.stopthewaronworkers.org.
Posted by 1Teamster at 9:56 AM No comments:

HOFFA JOINS THOUSANDS IN L.A. FOR MARCH FOR WORKERS' RIGHTS 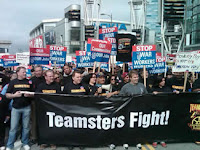 Teamsters General President James P. Hoffa joined tens of thousands of workers in a massive march and rally in downtown Los Angeles today to lend his voice and support to middle class, working Americans who are fighting to protect their rights on the job. View more photos from the rally.

In Wisconsin, Ohio, Indiana, Florida, Michigan and California, public employees and their right to collective bargaining are under attack by the same corporate CEOs that have fought to destroy these rights for private sector workers.

“To look out at the thousands of working men and women at today's march is inspiring,” said Teamsters General President James P. Hoffa. "Let this serve notice to all the anti-worker, corporate interests that are attacking America's middle class–we will not let them win!”

Labor leaders, workers, students, and community and religious leaders marched through the streets of Los Angeles stopping for actions at the Luxe Hotel, T-Mobile, Ralph’s and J.P. Morgan/Chase bank. Workers and union representatives called upon these employers to cease their anti-worker agendas.

Following the march, thousands participated in a rally at Pershing Square where labor and community leaders spoke out in support of working Americans and their fight to protect their way of life. Today’s rally was one of dozens of similar actions that took place across the country in what has been dubbed “Solidarity Saturday.”

“We must stand together and fight to protect the middle class,” Hoffa said. “Together they can’t beat us–together we will stop this war on workers.”
Posted by 1Teamster at 12:43 PM No comments:

What might surprise some is that Arkansas Best still regards its relationship with the Teamsters are largely beneficial. Arkansas Best is the parent company of ABF Freight System, a less-than-truckload carrier employing about 7,000 union drivers.

ABF took issue with certain concessions given by the Teamsters to YRC Worldwide, an Overland Park, Kan.-based less-than-truckload carrier employing about 25,000 union drivers. ABF filed its lawsuit asking for $750 million in damages that it suffered due to the alleged competitive advantage YRC was given in the marketplace due to the concessions. The complaint was dismissed in December by U.S. District Court Susan Webber Wright (Eastern District of Arkansas) for want of jurisdiction. Full Story.....
Posted by 1Teamster at 12:37 PM No comments: