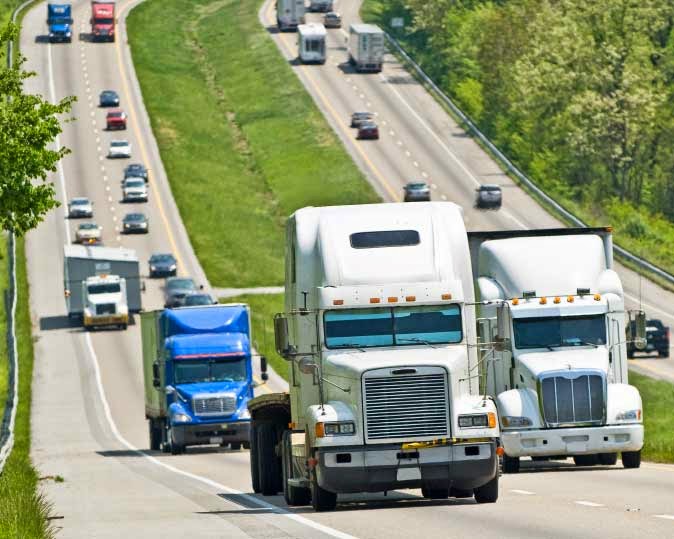 US and Canadian trucking companies have much in common, including their growing frustration over government interference in their businesses, with seemingly little thought given to the full implications of their decisions.

That was evidenced during a panel discussion on The Impact of Rules and Legislations on Fleet Operating Costs, hosted by Performance Innovation Transport at its second annual conference. Providing a fleet perspective on the subject were Mike Kelley, vice-president, YRC Freight and Mark Irwin, director of maintenance, eastern region, Bison Transport. Among their shared frustrations was the idea that government does not hesitate to foist costly regulations on the industry, while it continues to prohibit the use of safe and proven systems such as larger pup trailers in the US and 6×2 axle configurations in Canada.

YRC’s Kelley said the LTL trucking industry in the US would like to move from 28-ft. pup trailers to 33-footers, which would provide an 18% increase in capacity.

“The last time we’ve had any significant productivity increase was in 1982,” he complained. “We can save four billion tonnes of CO2 annually. But this will be anything but an engineering decision, it’s going to be a political decision and we’re in for a dogfight.”

Closer to home, Irwin would like to see the latest generation 6×2 axles allowed in Canada, pointing to weight savings of several hundred pounds.

“We need to get into this,” Irwin said. “This is something where we’re seeing significant fuel savings. It has been tested by PIT and we have confidence in PIT and what they do. The restrictions or the limitations of operating in Ontario as a result of this actually impacts our ability to perform business in Ontario.”

A Change in the Requisition Mindset

After years of not bothering to ask for funds for anything but the basics, YRC managers had to start thinking differently

This is the third in a series of six articles about the volatile financial misfortunes and turnaround of trucking company YRC Worldwide.

Mark Boehmer was in job-hunting mode. He’d been treasurer for 10 years at Sealy, the mattress company, when he began looking for a new opportunity. Before long, some offers materialized. One was for a fairly traditional treasurer position. Another was for a company where he’d wear a lot more hats, even though it was three times Sealy’s size. The kicker was that the second company, trucker YRC Worldwide, had been in a heap of financial trouble for years.


He was leaning toward the first offer when his wife voiced an opinion. “You should take this other job,” she said. “The passion in your voice is so much greater when you’re talking about it.” She was right, Boehmer decided, and he joined YRC as treasurer in mid-2013.

If Boehmer was looking for excitement, he surely found it. He came to YRC when it was negotiating with its lenders to restructure its credit agreements, so as to take the edge off of its then-ruinous interest costs. “You can restructure this debt,” the bankers told YRC, “if you get an extension of your union contract.” That was a reference to its deal with the International Brotherhood of Teamsters, 26,000 of whose members worked for YRC. The contract still had more than a year to run, but the company had no time to waste, as $395 million in principal repayments were due in 2014, including $69 million in February, and YRC didn’t have the cash to cover them.

YRC Worldwide Inc. is revamping its vehicle fleet in 2015 by adding new tractors and trailers as well as safety features to its current fleet.

The Kansas City Business Journal was granted an exclusive opportunity to see one of the new tractors — a 2015 Volvo Trucks North America VNM42T — and see its safety features in action.

Those tractors will be distributed throughout the YRC Freight network as they arrive.