One Company, Yes, But Will It Be Profitable?

Analysis by: John Schulz
Analysis of: Yellow and Roadway Now One Company
Published at: www.joc.com

YRC Worldwide says it has fully integrated the operations of long-haul national units Roadway Express and Yellow Transportation. The move comes five years after YRC bought Roadway for $1.1 billion. It also comes after YRC has lost a reported $1.612 billion in the last two years as the nation's largest trucking company by volume struggles with sales, operations and efficiency in the economic downturn.

Five years after then Yellow Transportation bought out rival Roadway Express for a whopping $1.1 billion, the two unionized long-haul carriers have finally merged.

In a press release, YRC Worldwide Chairman Bill Zollars trumpets the move as a "game-changing event for our company."

As one who called the Roadway Express purchase a mistake from the get-go, I do applaud Zollars and his team for getting this done in the face of the most wicked industrial and economic downturn in perhaps 75 years.

Transportation mergers are never easy. This one never was. Despite how attractive it looked on paper, merging some 600-plus terminals and 45,000 Teamsters into one functional company is no mean trick. YRC deserves kudos for doing it.

Now, will it work?

It almost has to. If it doesn't, YRC probably won't be around to pick up the pieces.

YRC is dancing a slow dance with its lenders, buying time at each quarter with terminal sales and lease-backs, wage concessions from its Teamsters, and discounting levels that are hitting a reported 80 percent off listed tariff rates, according to shipper sources.

But there is a payday in all this. For one thing, YRC is down to about 450 terminals. This source story says that is about "100 more than either Roadway or Yellow did individually," although that is not really the way to look at it.

The way to properly frame this exercise is it closed or otherwise disposed of nearly 150 duplicative terminals in the carriers' combined networks. That is real money savings. YRC can now sell the terminals for hard cash (it outright owns most of them, and the real estate underneath them), provided some company has the credit line to buy them.

Already, non-union Estes Express has purchased one for millions of dollars. That is going directly to YRC's bottom line, to keep its bankers happy by staying within the parameters of its loan covenants.

Shippers really hold the key to all this. If the combined Yellow-Roadway network suffers any noticeable service glitches, shippers are going to vote with their feet, no matter what level of discounts they are getting.

I've long felt this operation could cover the contiguous 48-state network with fewer terminals and real estate. ABF Freight System does the same thing with about 250 or so terminals. Although YRC's national network is perhaps two or three times larger than ABF's, I think with freight levels so depressed right now, 450 is about the right number for YRC.

If YRC has to shrink to survive, so be it. If it earns more money as a $6 billion company than it did as a $9.6 billion company, shrink it and be happy. After $1.613 billion in losses in two years, YRC would probably be happy with any level of profitability right now.
Posted by 1Teamster at 7:15 AM 1 comment: 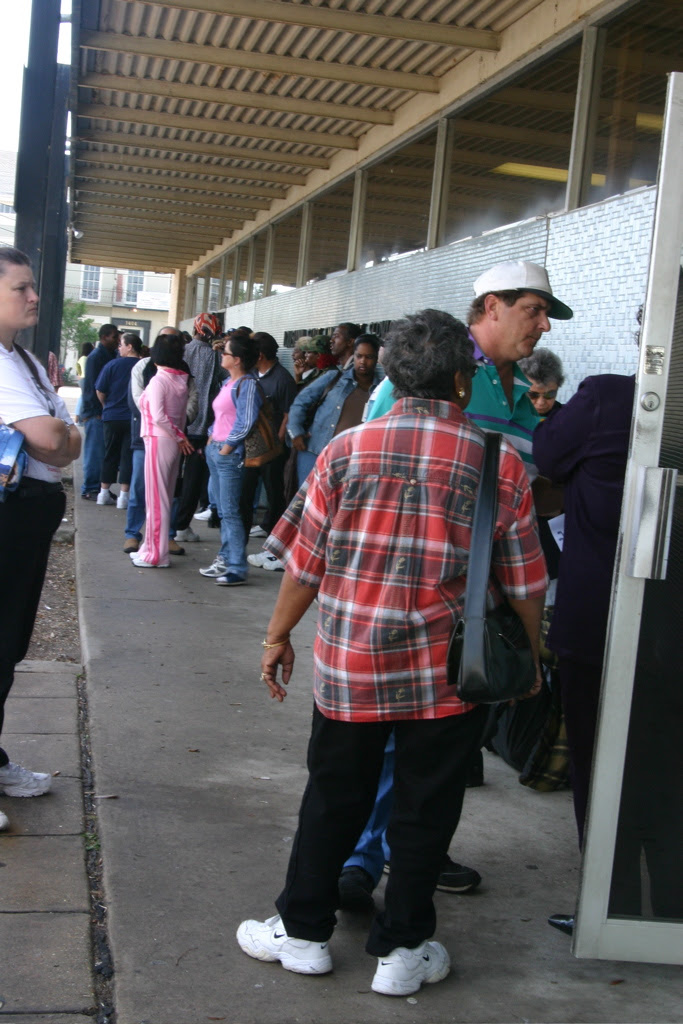 America lost another 651,000 jobs in February, pushing the unemployment rate above 8 percent, according to figures released Friday by the U.S. Bureau of Labor Statistics.

That means the nation has suffered a decline of 2.6 million jobs during the past four months. A total of 4.4 million jobs have been lost since the recession began in December 2007.

Unemployment shot up from 7.6 percent in January to 8.1 percent in February. The number of unemployed Americans increased by 851,000 during the month, rising to a total of 12.5 million.

Employment declines occurred in most sectors in February, with health care a notable exception.

The sharpest drop was recorded in the field of professional and business services, which lost 180,000 jobs in February. Other sharp losses occurred in manufacturing (down 168,000 jobs), construction (down 104,000 jobs), and financial activities (down 44,000 jobs)

Employment in health care actually increased by 27,000 jobs in February.
Posted by 1Teamster at 11:19 AM No comments: 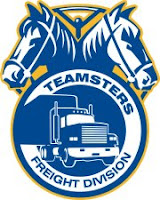 The Teamsters National Freight Industry Negotiating Committee has released documents related to the YRCW Stock Option Plan, including a summary of the plan. Read more about the stock option plan here.
Posted by 1Teamster at 4:56 PM No comments:

Last truck rolls off the line at Sterling Truck

More than a quarter-million trucks rolled off the line during the 11-year history of Sterling Truck, St. Thomas.

But this one, bearing a Canadian flag taped to the windshield, is the last.

Wednesday that truck, number 257,330, rolled off the line bringing an end to production at the South Edgeware Road facility.

Workers placed their hands on the vehicle and had pictures taken with a truck that marks the end of 17 years of truck construction here in St. Thomas.

"It is the end of an era. You're never going to see another Sterling Truck start up at the plant," said Dave Elliott, president of CAW Local 1001."It's a sad day, a very sad day for our membership."

He said the truck was built for ABF Freight, a long-time Sterling customer.

Truck production at the South Edgeware Road site began in 1992 under the Freightliner truck brand. Production of Sterling trucks began in 1998 and at its height, the plant employed more than 2,000 workers.

Back in October, 2008, Daimler Trucks North American announced the end of the Sterling Truck brand, stating the last shift at the plant would be March 27 — the plant would close two days later.

Until that time, Elliott said the remaining 700 or so employees will decommission equipment and ship tools and parts to other plants.

As March 27 draws near, it's going to be tough, he predicts.

"When these people you've been working with for 16 years, they go their locker... and give their final goodbye and shake your hand... emotions are going to run very high that day."

The union's job action centre on Mondamin Street — which will relocate to Local 1001's office on Curtis Street shortly — will remain open until the end of 2010 to help unemployed workers find jobs, Elliott said.

"We all keep our fingers crossed that someone might buy the plant and would be interested in having representation from a union. But there's no guarantees there. That's only a hope."
Posted by 1Teamster at 10:55 PM No comments:

Arkansas Best Corporation appears on the 2009 list of the World's Most Admired Companies, published by Fortune magazine. Arkansas Best is the highest ranking less-than-truckload motor carrier among the Most Admired Trucking companies. The full list and related stories appear in the March 16th issue of Fortune, available on newsstands Monday, March 9th.

"Arkansas Best is proud to be recognized with this prestigious honor," said Arkansas Best President and Chief Executive Officer Bob Davidson. "Our company's reputation has been earned by the consistent performance of employees throughout North America, who bring value to the supply chains of our customers. So it is particularly rewarding to see their efforts recognized as exceptional. In addition, our customers will be pleased to learn that their supply chain partner has earned the admiration of the world's best business leaders."

Fortune's survey partners at Hay Group, a global management consulting firm, started with some 1,400 companies: the Fortune 1,000--the 1,000 largest U.S. companies ranked by revenue; non-U.S. companies in Fortune's Global 500 database with revenues of $10 billion or more; and the top foreign companies operating in the U.S. They then sorted the companies by industry and selected the 15 largest for each international industry and the 10 largest for each U.S. industry.

The survey covers 64 industries: 25 international industries and 39 primarily U.S.-market industries. To create the 64 industry lists, Hay Group asked executives, directors, and analysts to rate companies in their own industry on nine criteria, from investment value to social responsibility. This year only the best are listed: A company's score must rank in the top half of its industry survey.
Posted by 1Teamster at 11:10 PM No comments:

With historic March 1 integration, Yellow and Roadway strength and experience unite in YRC

YRC Worldwide Inc. announced today the successful March 1 integration of the national networks for Yellow Transportation and Roadway. The two industry leaders will now do business as YRC, a brand providing more than 160 combined years of experience moving big shipments.

"This is a game-changing event for our company and the transportation industry," said Bill Zollars, chairman, president and CEO of YRC Worldwide. "By going to market as YRC, we're making it easier for customers to do business with the industry leader - and harder for the competition to match our network and our capabilities."

Zollars says through the hard work and support of the 37,000 YRC employees, the company implemented a strategic, phased-in approach to the integration. With nearly 450 service centers, YRC offers about 100 more service centers than either Roadway or Yellow did individually. The changes provide 21,000 additional direct service points and position YRC 20 percent closer to customers in major markets. This enables quicker pickups and deliveries, increased flexibility and reduced emissions.

"We've designed our network to help customers succeed. It's that simple," said Mike Smid, president of YRC. "We have the most comprehensive network in North America, the most experienced transportation professionals and the most flexible, efficient solutions to meet any supply chain need.

"The YRC network is built for precision and predictability, so our customers are assured of meeting the needs of their customers," Smid continued. "Our focus is delivering confidence to our customers."
Posted by 1Teamster at 7:33 PM No comments: