ABF Freight System, Inc., has secured a U.S. patent directed to its Electronic Shipment Planner, an Internet-based technology available through the carrier's website. This technology powers ABF's Shipment Planner and Shipment Snapshot applications and helps ABF customers manage and track shipments through a calendar interface. The U.S. Patent and Trademark Office, an agency of the U.S. Department of Commerce, issued U.S. Patent Number 7,003,720 to ABF.

Shipment Planner and Shipment Snapshot energize the carrier's reporting system by allowing customers to view and manage shipments online through a simple calendar interface. According to customer preference, shipments appear on the calendar by pickup date, due/delivery date or appointment date. Customers choose the types of shipments and the shipment information to be displayed. The items are hyperlinked to additional shipment detail. Customers also can customize the calendar to manage business and personal schedules.

"This patent exemplifies ABF's focus on developing innovative technological solutions that our customers find distinctly usable, saving them time and money," says Michael Newcity, ABF's director of e-systems and emerging technologies. "Through our ongoing assessment of customer needs, ABF continues to lead the industry in developing user-centric applications via Internet-based technology."
Posted by 1Teamster at 9:26 PM No comments: 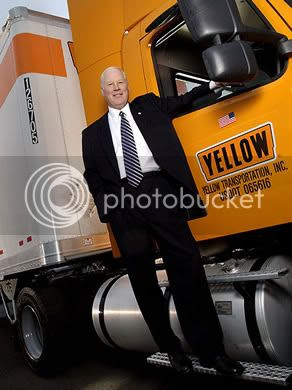 After earnings stumbled in the first quarter, YRC Worldwide Inc. has made corrections that executives believe should produce another record financial year for the Overland Park trucking giant.

Bill Zollars, YRC’s chairman and chief executive, made those assurances to investment analysts Tuesday after YRC ended a streak of 14 straight quarters of improved financial results with the 2006 first-quarter report issued a day earlier.

For the three months that ended March 31, YRC’s per-share earnings were 71 cents a share, a 26 percent decline from 96 cents a share during the same quarter last year.

But Zollars considered the first quarter a one-time setback.

“We made the adjustments necessary to get back on track,” he said. “We think we have the answers to these issues, and it gives us confidence going forward.”

Zollars dismissed suggestions that the company was too confident about what to expect in financial performance during the second half of the year.

“We try to give middle-of-the-fairway (earnings) guidance, and that’s what we’ve done,” he said. “Really with a good economy and the trajectory we have in our businesses, there’s no reason we can’t meet our goals.”

The market seemed to agree Tuesday. The stock jumped 7.37 percent in heavy trading, closing at $41.98 a share.

“How well they perform in the second quarter and the rest of the year is a function of how well the regional unit executes the integration plan,” Jindel said. “They have created opportunities for significant improvements in operating ratios at USF’s carriers.”
Posted by 1Teamster at 4:19 PM No comments:

Each year, 6,000 people are killed at work. Another 50,000 workers die from occupational diseases and millions more are injured.

Friday is Workers' Memorial Day, a time for Teamsters to remember and honor those who have lost their lives in the workplace, and to stand up to protect those on the job today.

April 28 was chosen because it is the anniversary of the Occupational Safety and Health Administration, and the day of similar remembrance in Canada. Trade unionists around the world now mark April 28 as an International Day of Mourning.
Posted by 1Teamster at 12:47 AM No comments:

The ads are part of an effort to raise workers' living standards through organizing, a campaign that includes rallies here and around the country.

The "Make Work Pay" campaign will bring Change to Win Chairwoman Anna Burger to Chicago on Wednesday. She'll participate in a rally with local labor leaders calling for support of a proposed Chicago city ordinance that would require employees at big-box retail stores like Wal-Mart to pay workers a "living wage" of at least $10 per hour and at least $3 per hour in benefits.

Unite Here Local 1, which will hold contract talks with downtown Chicago area hotels later this year, also has planned a rally with religious groups here Thursday as part of the campaign. That rally will take place outside the Congress Hotel, where workers have been on strike for nearly three years.

Change to Win ran television ads that aired Sunday during "Meet the Press," "Face the Nation" and other news shows on the major networks noting that for "tens of millions of hardworking Americans . . . while their companies' profits get fatter and fatter . . and their CEOs get richer and richer . . . workers get left farther and farther behind."

The ads spotlighted a survey showing 27 percent pay raises for CEOs at 200 large companies to an average of $11.3 million.

It is evidence Change to Win is dedicating more resources to organizing, said Jeremy Sherman, national chairman of labor and employment practices at Seyfarth Shaw, which counsels employers. But he labeled the campaign a "public relations effort," and said he's yet to see any indication it will translate "into meaningful success in organizing employees."

"We're trying to unite workers, to have a loud enough voice to [gain] economic justice," Burger said. "We are going to reach out to workers who are not yet organized and to the American people who know this country can't exist without a vibrant middle class. The implications are clear. When employers make work pay, entire communities benefit."

The campaign will bring leaders from Change to Win, which broke away from the AFL-CIO last summer because of disagreements over organizing and national leadership, together with local AFL-CIO leaders here. Illinois AFL-CIO President Margaret Blackshere and Dennis Gannon, president of the Chicago Federation of Labor, are among scheduled speakers at Wednesday's "living wage" ordinance rally in Chicago.

Burger said the ordinance seems to "set the stage, to say when we create jobs, they should be good jobs for our families and for our economy."

Locally, the United Food and Commercial Workers union Locals 881 and 1546 are among supporters of the ordinance. It could serve as a model for communities across the country, Burger said.

Business leaders have argued that it would deter businesses from opening here. David Vite, president and chief executive officer of the Illinois Retail Merchants Association, said the ordinance would discriminate against large retailers. He added that it would hurt some already financially struggling retailers and risk putting them out of business.

"They will be even more unprofitable, and God only knows if they are going to be able to survive," if the ordinance passes, he said.

Change to Win is made up of seven unions representing 6 million workers, including the Service Employees International Union, UFCW, Unite Here and the Teamsters, carpenters, laborers and farm workers unions.
Posted by 1Teamster at 9:42 AM No comments:

For the three months ended March 31, Overland Park-based YRC reported earnings of 71 cents a share, slightly above the company's revised forecast of 65 cents to 70 cents made March 22. Citing higher costs at one of its trucking units and soft retail business, YRC lowered its first-quarter projection from the initial $1 to $1.05 a share.

Bill Zollars, YRC's chairman and chief executive, said the company's performance was not what had been expected, despite the stronger revenue in all areas of the company.

"Given the first quarter, we have taken aggressive steps to improve our financial performance going forward," Zollars said in a statement.

Zollars has said that cost-savings generated by the company's acquisition of Roadway Corp. and USF would will stimulate earnings growth as integration proceeds.

Arkansas Best Corp. of Fort Smith on Monday announced first-quarter net income of $6.1 million, or 24 cents per diluted share, down 42 percent from $10.5 million, or 41 cents per share, for the same period last year.

Arkansas Best Corp.’s subsidiary, ABF Freight System Inc., posted first-quarter revenue of $413.7 million, up 7 percent from $384.1 million for first-quarter 2005. Due to the accounting charge, operating income also was down for the first quarter of 2006, with $8.4 million, down 51 percent from $17.2 million during the same period last year. Excluding the accounting charge, operating income was $16.8 million.

ABF's total weight per day was up 4 percent during the first quarter of 2006, compared with the same time last year.

"Although ABF's tonnage increase in the first quarter was adequate, we are not satisfied with this result," Robert A. Davidson, Arkansas Best's president and CEO, said in a written statement.

Excluding an accounting charge of $5.1 million related to distributions from the company‘s unfunded supplemental pension benefit plan, the company earned 44 cents per share. Analysts polled by Reuters Estimates, on average, expected earnings of 49 cents per share.

Quarterly revenue was $451 million, a per-day increase of 8 percent from the 2005 period, the company said. Reuters Estimates had projected revenue of $445 million.

The company said its ABF Freight System, a trucking operation, had first quarter 2006 revenue of $414 million, a per-day increase of 7.7 percent compared to first quarter 2005 revenue.
Posted by 1Teamster at 11:29 AM No comments:

ABF's total weight per day in the first quarter was up about 4 percent from the prior year. Arkansas Best President and Chief Executive called the increase "adequate" but said the company is "not satisfied with this result."

"Consistent with a trend seen during the last few years, ABF experienced higher growth in the segment of shipments moving 800 miles or less," he said in a statement.

Daily tonnage is averaging about 2 percent over last year for the first 20 days of April.
Posted by 1Teamster at 11:21 AM No comments:

Two owners of one of the state’s largest thoroughbred farms had been taking aerial photographs of the property in the hours before a helicopter crash killed them both, investigators said Friday.

Madonna, of Grantville, and Jones had purchased the horse farm last year, according to the farm’s Web site.

Jones worked for years in the trucking industry before retiring and purchasing the horse farm.

"He saw it as a great opportunity to follow up on a dream he had," said his son, Kurt Jones.

Jones worked for 27 years for Yellow Freight and then as the CEO for USF Red Star Corp. of Newark, N.J.

Witnesses reported that the two had been airborne three or four times throughout the day Thursday, with flights lasting anywhere from 20 minutes to an hour, according to Robert Gretz, an air safety investigator for the National Transportation Safety Board.

But there was no immediate indication about what may have caused the crash, Gretz said. "At this point, it’s so early we really haven’t been pointed in one direction yet," he said.

Witnesses said the crash happened around 4:30 p.m. after the helicopter had been hovering 200 feet off the ground and lost control. The tail rotor hit a building on the property and the main rotor struck a light pole, officials said.

Madonna, who was piloting the aircraft, also maintained a stable of roughly a half-dozen horses at Penn National Race Course in nearby Grantville, said Fred Lipkin, the track’s publicity director.

Lipkin described Madonna as a "very passionate, very enthusiastic person" about horse-breeding in Pennsylvania, and said Madonna had put a considerable amount of money into Regal Heir Farms since he purchased it.

"The farm is a beautiful farm, and they had great plans," Lipkin said. "I think they were looking into acquiring another farm in the area, to expand even further, bring in brood mares and have a place for the brood mares to live."

John Wames, president of the Pennsylvania Horsemen’s Benevolent and Protective Association, said he was introduced to Madonna by a mutual friend two years ago at Penn National’s clubhouse. Wames said the two would chat casually whenever they saw each other at the track.

"He was a real racing enthusiast -- he had really begun to invest a lot of money in the industry," Wames said.

The farm was formerly known as Reigle Heir Farms, named after its previous owners, Tom and Ann Reigle.
Posted by 1Teamster at 12:22 AM No comments: