“When President Bush says the economy benefits from trade deals, he must mean the part of the economy he cares about – the top one percent,” Hoffa said. “It’s not competition we’re afraid of, but the global capitalists who rig the system against the American worker.”

In a speech before a Miami audience, Bush called on Congress to pass free trade agreements in Latin America with Peru, Colombia and Panama, and also work toward passing an agreement with South Korea.

“The purpose of trade deals is to make Wall Street richer and to make the average working man and woman poorer. It’s no accident that average income actually fell between 2000 and 2005,” Hoffa said.

Hoffa was referring to new IRS data that shows the rich in 2005 had the biggest share of U.S. income since the 1920s.

“It’s especially outrageous that President Bush would urge the passage of a treaty with Panama when the president of the country’s national assembly, Pedro Miguel Gonzalez, killed a U.S. soldier near the Panama Canal in 1992,” Hoffa said.

“We need to re-evaluate existing trade deals and put a stop to the ones we’re considering—not just Panama, but Peru, Colombia and South Korea.”

Congress is expected to vote on the Peru and Panama trade agreements in the coming weeks.
Posted by 1Teamster at 6:26 PM No comments:

Improve safety for U.S. and China

While walking along a Detroit sidewalk last month, a friend's 6-year-old son picked up a small, unremarkable golden locket. He chipped away dirt clumps before reading, "Made in China."

He offered me the locket. I told him I didn't see the words. "Where do you see that?" I asked. He grinned, then exploded with laughter -- he was fooling me.

Like the best jokes, it contained a nugget of truth. My friend's son had been reading for only a year or two, but he'd come across "made in China" enough to know that the phrase is on countless items. The phrase has become a part of American life. Full story here......
Posted by 1Teamster at 12:59 PM No comments:

(Washington, D.C.) – Thousands of members of the United Auto Workers (UAW) walked off the job at Chrysler plants across the country on Wednesday, October 10. Teamster carhual members will not cross or work behind UAW picket lines.

“Until the strike ends, our 10,000 carhaul members will be out there honoring the picket lines by not crossing or working behind the lines,” said Fred Zuckerman, Director of the Teamsters Carhaul Division.

“We support the UAW in winning a fair and decent contract,” General President Jim Hoffa said. “Our members will do what they can so that the UAW is successful.”

Carhaul members who have questions related to the strike should call International Union Representative Paul Houck at (202) 624-8779.

The International Brotherhood of Teamsters represents more than 1.4 million workers in North America and nearly 10,000 drivers in the automobile transport industry.
Posted by 1Teamster at 2:32 PM No comments:

Conventional wisdom says the only way to invest in transportation these days is via the railroads. With Berkshire Hathaway buying Burlington Northern (BNI) shares by the trainload, who am I to argue? Warren Buffett obviously sees railroads as a “toll bridge”. There are only a handful of competitors and a host of nearly captive customers. If you want to ship coal, you’ll need a railroad and the choices are limited.

By contrast, the trucking industry is an extremely fragmented industry. Customers have almost unlimited choices from large integrated carriers to a guy in a pickup. The industry has often been characterized by excess capacity and irrational pricing. Let’s not forget that rising fuel costs disproportionately penalize truckers. Combine that with worries about the global economy and you have an industry that investors avoid. 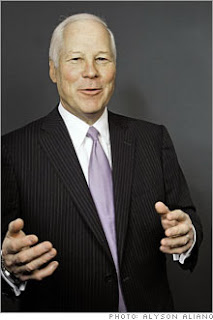 As the head of YRC Worldwide (formerly Yellow Roadway), a $10 billion trucking and transportation company with 27,000 trucks and customers in 80 countries, Bill Zollars has a crow's-nest view of the global economy. From the pace of Chinese manufacturing to shipments of holiday retail goods to fluctuations in gas prices, he has the data to grasp what's happening in economic sectors before the rest of us do. Amid rumors of a bid for YRC by German shipping giant Deutsche Post, Zollars tells Fortune's Matthew Boyle it might be a disappointing Christmas unless business perks up in the next few weeks. Full Story........
Posted by 1Teamster at 11:16 AM No comments:

Workers at UPS Freight (formerly Overnite Transportation) in Indianapolis overwhelmingly ratified their first contract ever today, by a 107-1 vote. This agreement will improve wages, benefits and working conditions and will serve as a model to organize thousands of other UPS Freight employees nationwide, Teamsters General President Jim Hoffa announced.

"For more than 50 years, workers at UPS Freight's predecessor, Overnite, fought to win a Teamster contract," Hoffa said. "Today the union fulfilled its promise that we would not quit until workers achieved economic justice. Now we will help thousands of other UPS Freight employees win the same protections and guarantees on the job that the Indianapolis workers have. After UPS Freight workers join the Teamster family, we will focus our future organizing efforts at FedEx Freight."

The Teamsters and UPS Freight reached a tentative agreement on September 30. The contract, which covers 125 dockworkers and drivers who belong to Teamsters Local 135 in Indianapolis, also provides employees the protections of a grievance procedure to fight unfair management decisions, something workers have fought hard to achieve.

"This is a historic day," said Ken Hall, Director of the Teamsters Parcel and Small Package Division who was lead negotiator. "Thousands of Overnite workers fought so hard for this day to happen. We won't stop until all UPS Freight workers have the secure future that they deserve by working under a Teamster contract."

"In Indianapolis, we have been fighting to join the Teamsters since the mid-1990s, and it feels great to finally have the backing of the strongest union in North America," said Jesse Nicholson, a road driver and 20-year employee. "We look forward to our brothers and sisters at other company terminals joining us so that they too will have the same security."
Posted by 1Teamster at 3:05 AM No comments: