“The ABL Facility provides us the liquidity to grow and invest in our business as seasonal requirements necessitate.  We believe the ’1′ rating of the receivables based facility is an indication of the credit worthiness of our customer base, the industry diversity of those customers, the structure of the facility and the overall high quality nature of the supporting collateral,” said Jamie Pierson, chief financial officer of YRC Worldwide. “Our liquidity position as of March 31, 2012 is the best it has been on a comparable quarter basis in three years, allowing us to continue executing on our strategy.”

“We continue to make great strides at YRCW as our newly optimized network at YRC Freight and corresponding decrease in standard transit times across much of the network is building on our commitment to improve service to our customers,” added Pierson. “And as usual, the regional companies continue to provide best-in-class service for their customers in the next-day and two-day industry segments.” 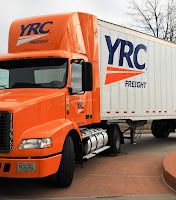 Transportation firm YRC Freight Inc. is moving from the former Roadway Express truck terminal at 6180 Hagman Rd. in Toledo to the former Yellow Transportation terminal at 4431 South Ave., the company said Monday. It has been trying to sell the Hagman Road terminal for about a year, although a price has not been disclosed.

YRC Freight, formed in 2003 through a merger of Yellow Transit and Roadway Express, said the move will not affect its Toledo-area operations and is being done to cut costs. Suzanne Dawson, a YRC Freight spokesman, said she could not say when the move will be completed.

"Never in the 65-year history of Maryland's Safe Truck Driving Championships has a driver repeated as the Grand Champion, until now," said Craig Talbott, vice president of safety for the Maryland Motor Truck Association. "Making the accomplishment even more remarkable, Smetzer competed in an entirely different driving class this year.  In 2012, Smetzer won the Grand Championship while competing in the twin trailers classification.  In 2011, Smetzer won first place in the 3 axle van class."

Smetzer has been driving accident free for over 29 years, with 21 years dedicated to ABF. Domiciled at Hagerstown, Md., Smetzer has received numerous safe-driving awards, including the Gold Safe Driving Award, the 20-Year Safety Performance Plaque and 20-Year Safe Driving Patches.