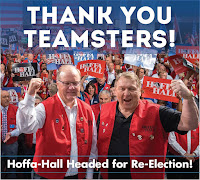 It is a great honor to be reelected as General President of the Teamsters Union.

I want to thank my fellow candidates and supporters who spent countless hours campaigning for our slate.

I also want to congratulate our opposition for a hard fought campaign. There is more that unites us than divides us. Members may have their disagreements, but at the end of the day we are all Teamster brothers and sisters.

In the coming months and years, we will need to stand together to fight our real enemies: ruthless employers, unfair trade deals, attacks on our pensions and a hostile political climate. We will need to work together, regardless of which slate we supported, to win these battles.

Although this is a time of great division in our country, it is my hope that we can unite as brothers and sisters following our election and work to make a more perfect union.

Teamsters joined with hundreds of other union members and activists at a Capitol Hill rally yesterday afternoon to laud the defeat of the Trans-Pacific Partnership (TPP) and to talk about how trade policy must be reshaped in the future to benefit everyday Americans.

Sen. Bernie Sanders (I-Vt.) headlined a slate of lawmakers and labor leaders who hailed the halting of the 12-nation TPP deal, saying the victory belonged to union members, fair trade advocates, environmentalists and other advocates who spent years protesting the agreement. Together, they raised public awareness that ultimately led to the TPP’s demise.

“We have taken on corporate America, we have taken on the National Association of Manufacturers, we have taken on the pharmaceutical industry, and we have defeated the Trans-Pacific Partnership,” Sanders, the former Democratic presidential candidate, told attendees. “Those are no small things.”
But he and others warned there is much more to be done to ensure that policies that are best for workers are instituted. They noted that while TPP failed because it “stacked the deck” against hard-working Americans, future trade efforts must be examined closely.

Rep. Rosa DeLauro (D-Conn.), a long-time TPP opponent who helped lead the fight against the deal in Congress, said it is time to rewrite the rules on trade so that any future agreements won’t be another boondoggle on behalf of big business.

“We will remain united in our fight to deliver that change. We face a new chapter in U.S. trade, and our negotiations should reflect increased transparency, input from civil society and policymakers, and elimination of fast track,” she said. “I promise you that we will keep up the pressure and ensure that the people who have fought for years to defeat this agreement did not fight in vain.”

The TPP result is a win for working families. But fair trade supporters must remain vigilant to ensure future victories over Washington lobbyists and corporate fat cats.

Drivers at XPO Logistics in suburban Philadelphia voted for Teamster representation today, propelling a nationwide campaign where XPO workers are standing together and forming their union to win fairness and respect on the job. The vote was 37 to 13.

The 52 drivers at the former Con-way Freight join workers in Miami; Laredo, Texas; Vernon, Calif.; Aurora, Ill.; and in North Haven, Conn. who have already voted for Teamster representation. In addition, 777 workers at Parsec, Inc., in California, who handle XPO freight, voted to join Teamsters Local 986 this week. Hundreds of XPO trucks come in and out of the Parsec yard each week.

"Three victories at XPO in less than a month (Aurora, North Haven and King of Prussia) show that the workers are building momentum in their quest for fairness, strength and a real voice at one of the world's largest transportation companies," said Tyson Johnson, Director of the Teamsters Freight Division. "We will continue to stand with XPO workers across the country who demand positive change."

"Despite the company sending in its high-priced union busters, the workers stood strong, boldly and united in their fight for a better future," said Michael Bonaduce, President of Teamsters Local 384 in Norristown, Pa. "Now, the fight for a strong contract begins."

"This is a great day for us and we urge our co-workers across the country to stand bravely to win dignity, respect and fairness by banding together," said Bill Strouse, a road driver and 23-year employee. "We need to have a voice on the job so that management will listen to our concerns."