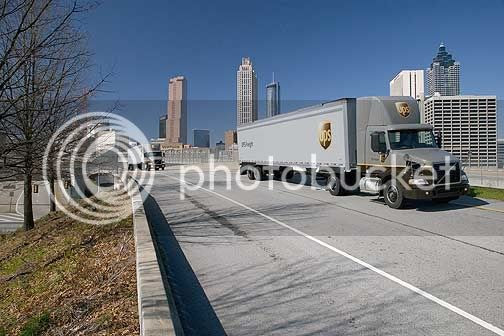 Overnite Transportation said goodbye to its name and colors yesterday, but not without a tip of the hat to the company's founder.

J. Harwood Cochrane, who started Overnite in 1935, was honored at a brief celebration marking the first day operating as UPS Freight

"This man had a vision unequalled in the transportation business," said Leo Suggs, president of UPS Freight, who was president and CEO of Overnite. "We owe him more than we can ever describe."

Hundreds of employees gathered outside the company's headquarters in South Richmond and whooped and applauded the 93-year-old Cochrane.

"I'm glad to be back where I spent many years," said the white-haired retired executive. "I want you to know I'm still on the payroll, and I'm still proud of our retirement fund."

Cochrane, known as one of the area's top philanthropists, briefly talked about his father's blue-collar roots and his own modest beginning.

While noting a respect for education, Cochrane said: "Around here we promoted people for their work ethic. Flexibility meant more than degrees," especially "if you could drive a truck in a pinch."

Cochrane led Overnite for more than 50 years until Union Pacific paid him and other shareholders $1.2 billion to buy it in 1986. In 2003, Union Pacific spun off Overnite, and it became a stand-alone, publicly traded company once again. Atlanta-based UPS bought Overnite for $1.25 billion last year. It was UPS' largest single acquisition, giving the package-delivery company a way to move heavy freight.


The new owner "marks but another chapter in a long history of success in the trucking industry," Suggs told employees. Having a link to UPS is vital for growth because "it's pretty obvious that successful transportation companies of the future will have a global presence," he said.

Overnite drivers will be trained to use UPS' hand-held computers that track deliveries.

"It's a little sad to see the name change," Suggs said, "but it's not the name on the side of the trucks that made us successful. It's the people of this organization."
Posted by 1Teamster at 8:49 AM No comments:

The Dimondale facility also has 60 members unpaid for their last two weeks of work, an official for Teamsters Local 580 said Wednesday.

The dispute is the latest in a series of disagreements between the Teamsters and former DHL contractor American Commercial Finance Inc. of Plymouth.

But he said 60 of his local's American Commercial workers were fired April 21. Three days later, Warner said, they were told they wouldn't be paid for their last 80 hours of work.

"It gets frustrating," he said. "You go and do what's right by workers and then this happens to them."

American Commercial officials could not be reached for comment. An automated message Wednesday said the phone number listed for the company's headquarters had been disconnected.

DHL, which is owned by Germany's Deutsche Post AG and has its U.S. base in Florida, replaced American Commercial with two "more financially sound courier companies" on April 24, spokesman Richard Gibbs said.

A Michigan court judgement against American Commercial endangered the contractor's ability to fulfill its work for DHL, Gibbs said.

The Teamsters local has filed complaints with the National Labor Relations Board against American Commercial and DHL over the matter, Warner said.

DHL's Gibbs said disputes over the payments "involve only the outgoing contractor and his employees."

The new contractors hired about 27 of the Teamsters workers, Warner said, but at wages about $5 per hour less than the $15 per hour their former union contract called for.

Talks of holding an informational picket were canceled late Wednesday.
Posted by 1Teamster at 8:42 AM No comments:

The American Trucking Associations unveiled a new security council on May 1.

The group’s security focus had previously been housed within ATA’s Safety and Loss Prevention Management Council. But because of the growing focus on security, the ATA established a separate entity dedicated solely to trucking security issues and operations.

The council’s mission is to serve trucking industry security through education and training, the exchange of information, interaction between peers, and evaluation and exposure to new technologies.

Susan Chandler will serve as executive director. Mike Hodge will be the director of claims and security.
Posted by 1Teamster at 11:10 PM No comments:

Arkansas Best Corporation will be making a presentation at the 2006 Bear Stearns Global Transportation Conference on Tuesday, May 9, 2006 from 2:20 p.m. - 3:00 p.m. EDT. The conference will be held at the Bear Stearns World Headquarters, 383 Madison Avenue at East 47th Street in New York, NY. Arkansas Best's president and chief executive officer, Robert A. Davidson, will make a company presentation and participate in a question and answer session. The live program will be Web cast (in a listen-only mode) and an archive will be available following the presentation.
To access the live audio, please go to the company's web site at http://www.arkbest.com . This presentation will be archived through May 31.
Posted by 1Teamster at 11:42 AM No comments:

Bill Zollars, Chairman, President and CEO of YRC Worldwide Inc. will deliver a company presentation at the Bear Stearns Global Transportation Conference on Tuesday, May 9, 2006, at 2:20pm ET. The conference will be held at the Bear Stearns World Headquarters at 383 Madison Avenue at East 47th Street, New York, New York.