Teamsters Call on Lawmakers to Prioritize Workers in Self-Driving Discussion 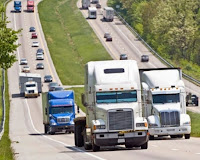 The Teamsters Union is calling for any federal legislation regarding ‘self-driving’  technology to take into account public safety and the millions of working Americans employed in transportation and related industries.

At a public hearing on Capitol Hill today, House lawmakers discussed 14 pieces of draft legislation on self-driving vehicles. The bills could be combined into a final package for introduction in the 115th Congress.

The Teamsters Union has been closely monitoring all aspects of the technology, urging lawmakers to prioritize safety and transparency in rules concerning the testing phase of self-driving vehicles. The union is calling for comprehensive federal rules regulating autonomous vehicles, including strong minimum safety standards. Under any such legislation, states and cities should retain their authority to regulate the safe operations of vehicles.

The Teamsters Union firmly believes that the interests of all stakeholders, including workers, must be taken into account by legislators and regulatory agencies as they explore and address developments in automation.

“If anyone needs to be at the table for a discussion on self-driving technology, it’s the package car driver, the longhaul truck driver and the taxi driver,” said Jim Hoffa, Teamsters General President. “We are encouraged that legislators are soliciting feedback on early proposed legislation, and we firmly believe it’s important that their constituents—and that includes Teamsters—are involved in the process and listened to throughout.”

There are currently no concrete federal laws governing automated driving technology or the testing of such technology. A number of states have enacted varying rules and guidances concerning semi-autonomous and autonomous vehicle testing.

As the rules are shaped, the Teamsters Union will be continually urging lawmakers and regulatory agencies to take a thoughtful and measured approach to ensuring safety on the roads, and hold operators testing self-driving technology to high standards of transparency and accountability.

“Federal safety laws and the laws governing our roadways have been developed over many years. We see no positive outcome that could come from any rush to implement laws due to urgency from the companies that have a profit interest in the rollout of their technologies,” said Lamont Byrd, Director of the Teamsters Safety and Health Department. “Technological advancements, like automatic braking and lane departure warnings, have helped drivers in many ways, but wholescale and expansive changes that are not properly vetted and overseen by public officials will not serve anyone when it comes to safety.”
Posted by 1Teamster at 11:27 PM No comments:

The Teamsters believe XPO Logistics, Inc.’s stated plan to buy more companies and expand its global operations to Asia and beyond is fraught with risk because of the company’s record of integrating businesses while implementing unsustainable policies and practices that harms its workforce.

“My message to XPO CEO Bradley Jacobs is clear: before you buy up more companies in your endless zest to make even greater profits, fix the problems that are wreaking havoc on your existing workers,” Teamsters General President Jim Hoffa said. “XPO freight workers in the U.S. have lousy health insurance, no retirement security and the company spends hundreds of thousands of dollars to deny workers their federally protected right to form a union, while port drivers are illegally misclassified as independent contractors and are subject to wage theft.”

Last month, port drivers at XPO and other companies went on strike to protest the illegal misclassification and wage theft. Meanwhile, workers at six freight terminals and one warehouse have formed their union as Teamsters, despite the company spending hundreds of thousands of dollars—$3,000 per day for each union buster it hires—to stomp on workers’ rights to form their union. The company has stooped to new lows by firing three freight workers in Trenton, N.J. who supported the successful union drive at that terminal.

During recent media interviews, Jacobs said he wants to acquire more companies. However, he is facing shareholder revolts in the U.S. and in Europe. In May, a near-majority of independent shareholders opposed XPO’s “say-on-pay” measure, and in Europe an investor called for the removal of XPO executives from the board and whose minority ownership of XPO Logistics Europe may impede Jacobs’ plan for further acquisitions.

These plans are further hampered due to the company’s heavy debt load (over $5.3 billion).
Meanwhile, Jacobs has received a $20 million mega-equity and got the board to rubber-stamp a $110 million stock-bonus plan (the largest in the U.S. in 2016) for himself and a chosen few.
Posted by 1Teamster at 10:55 PM No comments: