In conjunction with Trucking and Moving Day, elite million mile accident-free drivers shared their message of highway safety with state officials. According to the Texas Department of Transportation, there were 3,422 traffic deaths statewide in 2007.

Leu told reporters at the event that, "Share the Road allows me as a truck driver to give people life-saving advice. Most automobile drivers were never taught what they can do to avoid an accident with a tractor-trailer. By being aware of the blind spots around trucks, all drivers can more easily avoid crashes. This information, and other safety advice, will help everyone to share the roads safely."

Today's presentation of Share the Road safety measures is important for motorists because, according to statistics:

There are over 20 million registered cars in Texas, a 40 percent increase since 2000. (TxDOT)

According to three different studies -- including the AAA Traffic Safety Foundation and DOT, 3 out of 4 truck-involved fatalities are unintentionally initiated by car drivers.

Following the safety demonstration today at the Texas State Capitol, reporters and photographers were given tractor-trailer rides on the highway. From the truck driver's perspective they viewed safe merging and stopping distances, and learned up close and personal some of the differences between how cars and large trucks operate on the highways. Today's demonstration was designed to teach specific skills in order for motorists to drive safely around other automobiles and around trucks on the highways, so that they arrive safely at their destinations.

Ride-alongs are also available by appointment Friday, Feb. 13.
Posted by 1Teamster at 4:52 PM No comments:

YRC Worldwide Inc. announced today that it has finalized an amendment ("the amendment") with the company's lenders of its credit facilities and renewed its asset-backed securitization ("ABS") facility two months prior to maturity.
Further details of the amendment will be provided on a call for shareholders and the investment community on Friday, February 13, 2009, beginning at 4:00pm ET, 3:00pm CT.

"We are pleased with the banks' support of our strategic actions and their confidence in our ability to improve our financial position," stated Tim Wicks, Executive Vice President and CFO of YRC Worldwide. "We feel good about the amendment that we reached and the flexibility it will provide us to help weather this economic recession. We look forward to discussing these flexibilities in our analyst call tomorrow."

The call will be open to listeners through a live webcast via StreetEvents at streetevents.com and via the YRC Worldwide Internet site yrcw.com. An audio playback will also be available after the call via StreetEvents and the YRC Worldwide web sites. Amendment details will be filed in a Form 8K with the Securities and Exchange Commission on Friday, February 13, 2009.
Posted by 1Teamster at 5:13 PM No comments:

The following is the official statement of Teamsters International Vice President Al Hobart regarding an offer from the more than 600 striking workers at Oak Harbor to the company to return to work:

"Following extensive discussion with local representatives and rank-and-file workers from Oak Harbor who have been on strike for more than four months, our union announced it had extended an offer to end this job action and return to negotiations.

"This offer is contingent upon the company allowing every worker to return to their positions free from reprisal from management with no change in the wages or benefits they earned prior to the strike. The company must also agree to return to the bargaining table to negotiate in good faith a fair agreement.

"In this tumultuous economic climate, it does not benefit the workers or the company to allow Oak Harbor to continue to lose business due to this labor dispute and face the growing risk of closing its doors forever.

"It is our hope that the company will see this offer as a positive step toward resolving our differences and addressing the challenge of negotiating a collective bargaining agreement that will not only provide Oak Harbor's workers with fair compensation and protections in the workplace, but secure a stable and capable workforce that will help the company compete and grow."
Posted by 1Teamster at 5:03 PM No comments: 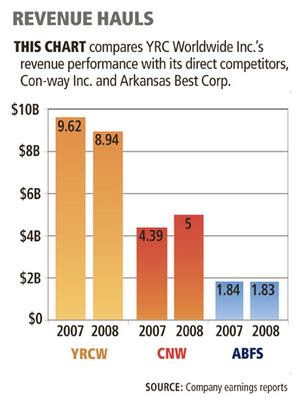 YRC Worldwide Inc. has battened down the cost hatches, a massive ship trying to stay afloat in the face of a stormy economy.

Efforts to accomplish that included a string of layoffs during 2008, mostly in response to a freight downturn that began in late 2006. It cut more than 12 percent of its work force, going from 63,000 employees at the end of 2007 to about 55,000 at the end of 2008. Overland Park-based YRC, which has about 2,000 local workers, shoves into 2009 buoyed by expectations of $500 million in savings from across-the-board pay reductions and the integration of its Yellow and Roadway units.

“The challenges are going to be the same for everyone in the industry,” he said. “But the opportunities are unique to us. ... This closes the gap with competitors from a cost standpoint, and at the same time, customers will be able to get better service through one integrated network.”

This year will bring more job cuts, he said. By March, the ax will fall on positions affected by the Yellow-Roadway integration.

JP Morgan analyst Thomas Wadewitz predicted in a Feb. 2 note that 10 percent to 15 percent of the 37,000-member Yellow and Roadway work force would need to be cut this year as freight tonnages fall further. That could save $455 million, he estimated.

Although YRC has plenty of cost-saving potential, last year’s cuts didn’t keep it from reporting a $974.4 million loss for 2008 and a 7 percent drop in revenue to $8.94 billion. The results included write-downs of $141 million for the Roadway trade name and $59 million for YRC Logistics.

“The biggest impact on all players in our industry has been the economic downturn,” Zollars said. “The reality is that because we’re the biggest, we have the most infrastructure and therefore the most operating leverage, and therefore we’re hit the most.”

Although YRC “has very significant drivers of cost reduction in place for 2009,” he wrote, with revenue sinking at an alarming pace, the company will find it difficult to realize a quick improvement in earnings-per-share performance. Full Story......
Posted by 1Teamster at 10:04 AM No comments:

Keeping in line with steps it has been taking to improve transit times, UPS Freight, the less-than-truckload subsidiary of UPS, said today it is improving transit times for 2,250 lanes that for shippers in Texas and southern Oklahoma.

UPS officials said these transit time improvements will extend the reach of its one-day, intra-Texas service to include direct service to more than 385 zip codes and improve transit times between Texas and Oklahoma and other major U.S. markets. Some examples of the improved transit times include: next–day service for Corpus Christi, Victoria and Kingsville to Houston and Dallas; expanded next-day service for movements between Witchita Falls, San Angelo and Lawton, Okla., to Dallas, Houston and Austin; and faster transit times in various Texas cities, including Pampa, Amarillo, Brownwood and Del Rio. The improved transit times further allow customers in Lawton, Abilene, San Angelo and Witchita Falls to reach Atlanta in two days and Charlotte, N.C., in three, according to UPS.

And this effort coincides with a transit time improvement effort UPS Freight has been focused on for the last 20 months, which include:

A December 2008 announcement stating it has rolled out transit time improvements for 250 lanes between central Illinois and various U.S. points;
an October 2008 announcement focused on improved transit times on more than 1,900 traffic lanes in eight Western states, reducing transit times by at least one day for shipments originating in service centers in Arizona, California, Colorado, Illinois, Kansas, Missouri, Oregon and Washington;

An August 2008 announcement focused on improved transit times on more than 1,200 traffic lanes originating in the Midwest, Northeast, and Mid-Atlantic regions of the United States—for two-day lanes from Chicago to Dallas, Boston to St. Louis, and Philadelphia to Miami; and

A May 2008 announcement focused on reduced transit times on nearly 1,000 traffic lanes originating in metropolitan areas in the Southwest and Southeast regions of the U.S. to myriad domestic destinations.

UPS said it has augmented transit time performance in roughly 15,000 lanes over the past two years, which provides shippers with faster service in two-thirds of all U.S. ZIP codes. This is part of the company’s strategy to provide shippers with a value proposition through faster transit times, technology, and reliability.

UPS Freight Director-Media Relations Ira Rosenfeld told LM that the planning behind today’s news began last summer, and he pointed out that it is important to realize that these transit time improvements aren’t related to the economy as much as opportunities to enhance its offerings to shippers with direct service.

“Direct service means we can offer guaranteed service to these points,” said Rosenfeld. “As you move more and more of these markets away from agencies and into your own network from pickup to delivery there is the UPS Freight guarantee plus the increased visibility of the minute the freight is picked up the UPS driver, armed with his hand-held DIAD (delivery information acquisition device), who immediately puts the complete shipping information into our network where both shipper and consignee can have access.”

These guarantees, which were introduced in November 2007 and took effect in January 2008, promise shippers on-time delivery performance with no additional financial strings attached. The on-time service promise is for LTL customers who ship using the current UPS Freight 560 tariff in the continental United States. UPS said the guarantee promises that customers can request a waiver of their freight charges if their shipment doesn’t arrive on time. UPS’ Freight 560 tariff is its zip-to-zip class rate that applies in the contiguous 48 states.

“The no-fee guarantee promises that [customers’ shipments] will get there on time…allowing customers to better control their inventory,” said Rosenfeld in a 2008.

He also said that these transit time improvements, coupled with the reliability guarantee, give shippers the ability to take full advantage of UPS Freight’s capabilities as a regional and interregional carrier.
Posted by 1Teamster at 7:35 AM No comments: