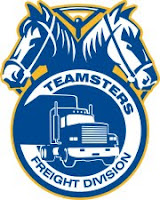 YRC Worldwide Inc.’s union, whose members have forfeited about $2 billion in compensation to help keep the company afloat, is trying to persuade reticent bondholders to agree to a debt-for-equity swap that’s key in helping YRC avoid bankruptcy.

The head of the International Brotherhood of Teamsters, which has about 40,000 workers employed by YRC, on Wednesday sent a letter to the CEO of financial services bigwig The Goldman Sachs Group Inc., Iain Gold, the Teamsters’ director of strategic research, said Thursday. In it, he said, Teamsters General President Jimmy Hoffa asked whether Goldman Sachs was gambling that it could make more money through credit-default swaps than by participating in the debt-for-equity exchange. The exchange would wipe out a chunk of YRC’s debt and put bondholders in control of most of YRC’s common shares.

YRC Worldwide Inc. said Thursday it extended the deadline for its proposed debt-for-equity exchange for a third time and lowered its threshold for acceptance because it failed to get enough of a response.

With today's announcement, YRC needs 70 percent of holders to swap the 8.5 percent guaranteed notes and 85 percent to swap the convertible notes. Full Story......
Posted by 1Teamster at 2:03 PM No comments:

Goldman Sachs Accused by Teamsters of Driving YRC Toward Ruin

The International Brotherhood of Teamsters is accusing Goldman Sachs Group Inc. of underwriting derivatives trades that would benefit from the bankruptcy of YRC Worldwide Inc., the biggest U.S. trucker by sales.

“The relatively small benefit Goldman would derive for itself in fees or for clients from such a position is unconscionable given the fact that the 50,000 livelihoods could be ruined by a bankruptcy filing,” Teamsters President James Hoffa wrote in a letter dated today to Goldman Sachs Chief Executive Officer Lloyd Blankfein. Full Story.....
Posted by 1Teamster at 6:43 PM No comments:

Arkansas Best Corporation announces the appointment of J. Lavon Morton to the position of Senior Vice President, Tax and Chief Audit Executive. Donald W. Pearson has been named Vice President, Treasurer. R. David Humphrey will become Vice President, Investor Relations and Corporate Communications. All of these promotions will be effective on January 1, 2010.

"I have worked closely with Lavon, Don and David throughout my career at Arkansas Best," said Judy R. McReynolds who, as previously announced, will become Arkansas Best's President and Chief Executive Officer on January 1, 2010. "Each of them has been a key contributor to the long-term success of Arkansas Best. As we face the on-going challenges of the current business environment, I look forward to continuing to work with them, and all of our outstanding officers and employees, to build toward the future success of Arkansas Best and ABF."

In his new position, Lavon Morton will continue to have responsibility for the company's tax and audit functions. In addition, he will oversee administration of the company's executive compensation and retirement services functions. Mr. Morton has 13 years of experience with the company. He has served as Arkansas Best's Vice President - Tax and Chief Internal Auditor since January 2000.

In his new role, Don Pearson will be responsible for the traditional treasury functions of the company including oversight of Arkansas Best's banking relationships. Mr. Pearson has been employed at Arkansas Best for 24 years. He has been the Director of Cash Management since February 1996. He will also have responsibility for corporate purchasing at Arkansas Best.

In his new position, David Humphrey will continue to oversee Arkansas Best's investor relations program. In addition, he will be responsible for Arkansas Best's corporate media and public relations activities. David has 26 years of experience with the company. He began his current position, as Arkansas Best's Director of Investor Relations, in February 1998.

"Arkansas Best is currently working with an outside firm in a search for our company's new Chief Financial Officer," said Ms. McReynolds. "During this process we will be evaluating both internal and external candidates. As we carefully look for the best person to fill this important position, the search process could take about four to six months."
Posted by 1Teamster at 12:40 PM No comments: 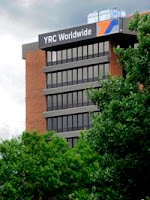 Embattled trucking firm YRC Worldwide Inc. last week took another step to preserve cash, telling its nonunion employees that their pay will be slashed again for one month starting Wednesday.

YRC's salaried work force, which already took a 10 percent wage reduction to start the year, will have its pay reduced an additional 18.4 percent over the next month, ending Jan. 15. Details of the cut were disclosed in an e-mail sent to employees last week by Bill Zollars, YRC's chairman and chief executive.

Also in the message, Zollars said a one-week furlough for all nonunion workers that began in October and was expected to continue through early March would instead be completed by Feb. 1. The original plan had been for employees to take eight hours off each month over five months, which would amount to a one-week furlough. Full Story....
Posted by 1Teamster at 8:16 AM No comments:

LTL trucking companies such as Con-way Freight are cutting deep into prices to build volume, Longbow analyst Lee Klaskow said in a Dec. 14 note to investors.

FedEx Freight and Con-way Freight “continue to be the leaders when it comes to aggressive pricing,” said Klaskow. “We believe pricing can do down even further as we head into the slow winter freight season.” Shippers report rate discounts as deep as 85 percent, Klaskow said.

LTL rates were already anywhere from 5 percent to 15 percent lower than a year ago going into December, according to analysts and carrier executives.

Klaskow expects bitter price battles in coming quarters, despite forecasts calling for higher demand and more stable rates. The first quarter is typically the weakest for freight, he said, “and we expect pricing to be exacerbated by looser capacity.”

Larger LTL carriers are also trying to keep pressure on YRC and other struggling competitors.

Earl Congdon, executive chairman of ODFL, in October said LTL pricing was “not sustainable,” implying the cost of full utilization can be too high, he said.

“Those carriers,” he said of competitors pricing at or below cost, “are not going to be able to operate with the prices they’ve been quoting.
Posted by 1Teamster at 5:02 PM No comments: