Teamster's vote only a start on YRC Worldwide overhaul

YRC Worldwide Inc.’s union workers unloaded at least $45 million in monthly costs for the company when they approved a second round of concessions.

“This is an important step forward in our comprehensive recovery plan,” YRC Chairman and CEO Bill Zollars said in an online video to customers.

But the vote probably means only about a $7 million a month incremental cash benefit, leaving the trucking titan with plenty of weight to shift — including improving its freight volumes — to roll out from under its financial woes. Some analysts still doubt YRC can avoid bankruptcy much past the end of the year.

On Aug. 7, International Brotherhood of Teamsters members agreed, among other things, to forfeit 18 months of pension payments and take an extra 5 percent pay cut, for a total 15 percent cut this year. Because YRC already deferred about $128 million in pension payments in the second quarter, the concessions bring only an incremental cash benefit, analysts said. Other variables, some of which YRC has little control of, have to cooperate for it to survive and head to black.

Results must improve each quarter, shipping volumes need to stabilize or recover each quarter, and cost-saving measures and cash-building arrangements have to proceed as expected, YRC said in an Aug. 10 Securities and Exchange Commission filing. A key hurdle — without which the union can terminate concessions — is resolving almost $387 million of bonds in the first half of 2010. Pension funds also must allow YRC to skip 18 months of pension payments.

An area third-party logistics provider, who asked not to be named, said a local client shipped about 40 percent of freight with YRC last year and by June had cut that to 25 percent, with the intention of reaching zero. The shift began because of service concerns and now is based on YRC’s finances, the source said.

Should YRC fail, the source said, it would be “unbelievably devastating to the local economy.”

YRC senior managers are spending the second and third weeks of August on the road, trying to reassure key customers.

Freight tonnages have yet to show promise. In June, the most recent month for which data is available, the American Trucking Associations’ truck tonnage index fell 2.4 percent, after a 3.2 percent rise in May.

“We did a dramatic fall off a cliff, and it appears we’re just sort of bouncing around on the bottom now,” ATA Chief Economist Bob Costello said. “But it’s a volatile bottom if we’re really at the bottom.”

He predicted a slow recovery, with growth beginning sometime this year and remaining slow into next year.

Although he said he expects a mild seasonal uptick in the fall, it would be up to YRC to recapture business and demonstrate improvement.

He said he’s heard stories of “dirty sales tactics” by carriers trying to scare customers away from YRC. However, small and midsize shippers are swayed more by price and service.

“Right now, price is the name of the game,” Wagner said.
Posted by 1Teamster at 7:44 AM No comments:

An industry analyst is raising strong doubts about whether trucking company YRC Worldwide Inc. will be able to avoid bankruptcy, even with the latest labor contract concessions from its 35,000 Teamsters employees.

''Bankruptcy, in our view, is not imminent, but we do believe it is becoming increasingly likely,'' wrote transportation analyst David Ross of Baltimore-based Stifel Nicolaus. Other industry analysts have also said YRC could file for bankruptcy.

In the report issued Wednesday, Ross downgraded YRC shares from ''hold'' to ''sell,'' saying company stock is basically worthless. It is likely that the first quarter of 2010 — typically the industry's weakest time of the year — will be the company's last, he said.

Company employees now own ''35 percent of zero,'' Ross said in an interview.

YRC executives have been saying that they are cutting costs and making other changes to improve company finances. Chief Executive Officer Bill Zollars called the Teamsters vote on the latest concessions ''game changing.''

The company issued a statement Wednesday in response to the analyst report:

''YRC Worldwide continues to report significant progress on its comprehensive plan to manage through the economic recession. Through the ongoing support of its key stakeholders including its lender group, union and non-union employees and pension funds, the company is moving forward with its strategic plans to restore financial strength and position its operating companies for future success. 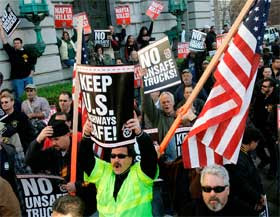 President Barack Obama will travel to Mexico on Sunday to attend his first summit with his Canadian and Mexican counterparts, in a meeting that the latter hope will shed light on how the U.S. plans to address trade disputes involving Mexican trucks and "Buy American" provisions seen as favoring U.S. companies.

Canadian and Mexican officials said their countries will focus on trade, with Messrs. Harper and Calderón closely gauging Mr. Obama's response to disagreements over "Buy America" provisions in the U.S. economic-stimulus plan, and Washington's ban on Mexican trucks operating in the U.S.

Terry Certain, of Murfreesboro, was named the best professional truck driver in Tennessee after winning the three axle competition and receiving the highest overall score in the nine competing categories at the 2009 Tennessee Truck Driving Championships. The annual event is sponsored by the Tennessee Trucking Association.

Certain, who drives for Con-way Freight, now qualifies to compete in the American Trucking Associations' National Truck Driving Championships August 18-22, 2009 in Pittsburgh, Penn. -- also known as the "Super Bowl of Safety." The winners from each of the eight other categories are also eligible to compete in the national championship.

Nearly 400 drivers from all 50 states will compete in Pittsburgh for four days, challenging their driving skills, and knowledge of safety, equipment and the industry. From 18-wheeler five axle sleepers to tank trucks to twin trailers--they will drive a course that recreates situations truck drivers face daily. These maneuvers may include: an alley dock, a rear line stop, a side park, a scale stop, a right turn, a front line stop, and straight line driving through a diminishing clearance.

On Saturday night, August 22, one contestant will drive away as the 2009 National Grand Champion Truck Driver.

"The Truck Driving Championships represent the culmination of the industry's dedication to safety," said Tennessee Trucking Association President Dave Huneryager. "I congratulate all the contestants, and I hope Tennessee roots for our drivers as they move on to Nationals in Pittsburgh."

Tennessee participants at Nationals for each category include: