ABF's Arthur N. Lynch to Retire After 35 Years With the Company

Arthur N. Lynch, vice president of sales for ABF Freight System, Inc., will retire January 31, 2007, concluding 35 years with the company.
"Art is a creative thinker whose understanding of customers and their supply chain guided us to a more consultative sales approach. Art served as mentor and friend to a great number of ABF personnel, helping to guide and shape careers," commented ABF President and CEO Bob Davidson. "We will miss him and want to thank him for his many years of dedicated service."

Mr. Lynch joined the company as a management trainee at the Chicago terminal in 1971. Upon completion of training, he became an operations supervisor in Chicago and was promoted to sales representative and then branch manager in Moline, Ill., in 1976. He was named regional vice president of sales in 1981. He was promoted to vice president of sales in 2000.

Mr. Lynch and his wife Gayle plan to return to the Chicago area and spend time with their children and grandchildren.

James W. Keenan, who has 24 years experience with ABF, will assume the position vacated by Mr. Lynch. Previously, Mr. Keenan served as vice president administration & treasurer for ABF.
Posted by 1Teamster at 8:52 AM No comments: 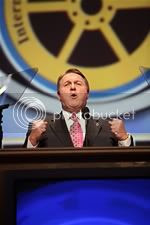 James P. Hoffa, headed to another 5-year term as general president of the International Brotherhood of Teamsters, said Friday the congressional elections will aid the rebuilding of organized labor.

Hoffa, who first became Teamsters president in 1998 and was elected to a full term in 2001, said the midterm elections that put Democrats in charge of the House and Senate should help labor achieve its goals.

"Now that we have the House and the Senate, that will have major effects on the way this country is run," said Hoffa, who was a labor lawyer in Detroit before moving up the ranks to head the 1.4-million-member transportation union.

Teamsters campaigned for Democratic candidates, committing millions or dollars and knocking on thousands of doors. along with other unions in the Change to Win federation.

The Teamsters want Congress to pass a law raising the minimum wage, block trade agreements that don't address labor concerns, seek better health care coverage for millions of uninsured people and pass legislation that would make it easier to form a union if a majority of workers want one, Hoffa said.

But he acknowledged that President Bush might veto pro-labor legislation passed by Congress.

"The Employee Free Choice Act certainly would help unions organize," said the 65-year-old Hoffa. "We have been hamstrung by the Bush NLRB (National Labor Relations Board) which tries to thwart the organizing of unions. Right-wing judges have done everything they can to thwart the American labor movement."

Hoffa said that congressional passage of such legislation would put the president on the spot.

"We're certainly going to embarrass him," Hoffa said. "Can you imagine him vetoing a minimum wage bill? He will look so bad if he does that."

More importantly, Hoffa said, Democrats will have the power to block right-wing nominees for judgeships and other government posts.

With about two-thirds of the vote totaled, Hoffa held almost a 2-1 lead over his opponent, Oregon Teamsters official Tom Leedham. Calls to Leedham's headquarters were not returned Friday.

Hoffa's opponent had claimed the incumbent was not strong enough to protect worker benefits and rebuild the flagging labor movement.

The Teamsters and a half-dozen other unions broke free of the AFL-CIO starting in the summer of 2005 and formed the Change to Win federation. The breakaway unions cited the need to focus more of their money and time on organizing.

Hoffa pointed to several Teamster organizing efforts recently. Among those are organizing 15,000 workers at UPS Freight, 5,000 bus drivers and as many as 100,000 port truck drivers.

And he said the Teamsters work together with the other unions in the Change to Win federation.

"We help each other in each battle," Hoffa said. "That wasn't there during the AFL-CIO days."

He said that going to the AFL-CIO "was like going to the United Nations. You had a diversity of dozens and dozens of unions with no common goal."
Posted by 1Teamster at 6:21 PM No comments:

FedEx Home Delivery drivers
at two locations in Wilmington, Massachusetts, voted 24-8 to overwhelmingly
choose Teamsters Local 25 in Boston as their bargaining representative, as
ballots they cast a month ago were counted today by the National Labor
Relations Board.
The workers are the first units in the FedEx Home Delivery system, a
subsidiary of FedEx Ground, to win Teamster representation. Since 1988, the
NLRB has ruled seven times that FedEx Ground and Home Delivery drivers are
not independent contractors as the company alleges, giving them the right
as employees to form a union.
"This is a great day for these workers," said Sean O'Brien, President
of Teamsters Local 25. "Their voice was finally heard despite every effort
by FedEx to silence them. I look forward to securing a first contract for
these drivers that will ensure they are treated like the employees both we
and the company know they are."
FedEx Ground employed stall tactics during the past month in an attempt
to deny the drivers their federally protected right to join a union. Its
final attempt was quashed when the NLRB refused to reconsider its ruling
that ordered the October 20 representation election, paving the way for
today's vote count.
"This vote sends one clear and simple message to FedEx -- the free ride
is over," said Teamsters General President Jim Hoffa. "These workers and
this union will not stand idly by while FedEx rakes in profits and avoids
its responsibilities to the workers and their communities by exploiting
this phony independent contractor model."
The Teamsters Union represents more than 1.4 million hardworking men
and women, including workers at UPS, UPS Freight and DHL.
Posted by 1Teamster at 5:45 PM No comments: