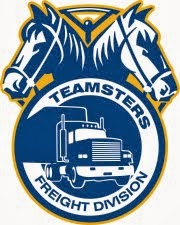 The Teamsters Union helped score a victory for truck drivers this week when H.R. 3095 was signed into law compelling the Federal Motor Carrier Safety Administration (FMCSA) to follow the formal rulemaking process to set strict guidelines for when they can require screening, testing and treatment for sleep apnea.
FMCSA was prepared to circumvent the rulemaking process by offering “guidance” on the testing and treatment of sleep apnea in the trucking industry. Unlike the formal rulemaking process, agency-issued guidance does not permit input from stakeholders. This could have led to drivers being required to take expensive and unnecessary tests that they would have to pay for. In response to this threat, the Teamsters joined with truck and bus industry stakeholders to mobilize and pressure Congress to introduce and pass the legislation.
“This law, which passed the House with a unanimous vote, protects millions of working men and women who turn a key for a living from being forced to spend money on a test they may not need at the whim of a federal agency,” said Teamsters General President James P. Hoffa. “The FMCSA will now have to address this through the formal regulatory process and allow the public to have a voice in the process.”
The agency will now be required to listen to drivers, doctors and carriers and analyze how much sleep apnea testing will cost. The medical studies that the agency is basing its rulemaking on will also be subject to public scrutiny. Sleep apnea tests can cost thousands of dollars, depending on how many nights a driver’s sleep habits are monitored.
“Times are tight for many working families,” Hoffa said. “We cannot allow federal regulators to make uninformed decisions that will cost millions of people a lot of money that they can’t afford to spend right now.”
Posted by 1Teamster at 11:19 AM No comments:

ABF was notified that one of our two final remaining supplements to the ABF National Master Freight Agreement – Western Office Part 5 – was ratified by a majority of covered employees following minor, non-economic modifications to the supplement. We thank our Western Office employees for recognizing ABF’s need to lower our costs and become more competitive in the marketplace while still preserving the best-paying jobs and benefits in the industry.

At this stage, 26 of 27 regional supplements have now been ratified since the national agreement was passed by a majority of our Teamster employees in June.

Employees in our Central Region Local Cartage are the only remaining group without a ratified supplement. According to the terms of the Teamster constitution, that group alone has now received ballots to authorize a strike despite many months of difficult negotiations between ABF and the Teamsters, along with passage of the national agreement and every other supplement across the country.

As previously stated, ABF has presented its last, best and final offer on the Central Region Local Cartage supplement and will not re-open the national agreement under any circumstances.

Following the passage of the Western Office supplement, we continue to encourage all Central Region Local Cartage employees to vote “NO” to a strike and to ensure their voices are heard by casting a ballot. Our goal is for ABF to regain market share and return to sustained profitability on behalf of all of the families and people who depend upon ABF.
Posted by 1Teamster at 11:17 AM No comments:

"YRC Worldwide is honored to be recognized as one of the best environmental performers of the 3000-plus SmartWay Partners. The SmartWay program has been an invaluable resource for us and we have the utmost respect and appreciation for their staff's leadership in drastically reducing the industry's emissions output," said James Welch, CEO of YRC Worldwide. "Reducing our carbon footprint by handling freight more efficiently for our customers continues to be a top priority for all of our YRC Worldwide companies."

"EPA is pleased to recognize the 2013 SmartWay Excellence Award recipients. I commend YRC Worldwide for its superior environmental performance and leadership in advancing freight sector efficiency," said Gina McCarthy, EPA Administrator. "Their commitment is helping lead the freight industry to a more sustainable future."
Posted by 1Teamster at 11:11 AM No comments:

Teamsters at ABF, who work under the Western Office Supplement, have approved the supplement. Ballots were counted on Monday, October 14.  About 67 workers are covered by the supplement.

The National Master portion of the ABF-NMFA (which contains the economic terms) has previously been approved by the membership. However, the overall tentative agreement cannot be implemented until all supplements have been resolved.

Those ballots will be counted on October 29.
Posted by 1Teamster at 11:08 AM No comments:

As YRC Worldwide Inc. Investor Cyrus Capital Partners reduces it share in the Overland Park-based company, a new group has taken over as the company's top investor.