Holland is proud to announce that professional driver Warren Clark has reached the rare safety milestone of driving three million consecutive miles without a preventable accident. This makes him one of just two active Holland drivers to have achieved this elite status.

Warren Clark, 63, has been driving for Holland since 1979, and currently operates a line haul route out of the Chattanooga, TN service center. His route takes him to and from Kentucky five times a week, travelling approximately 560 miles each round-trip.

"His accomplishment is truly an exceptional one," said Holland President Mike Naatz. "Warren's commitment to safety and professionalism is something that we at Holland are extremely proud of and grateful for."

To give this feat some perspective, three million miles is the equivalent to safely making six round trips to the moon or over 116 circumnavigations of Earth.

On Thursday, February 23, Warren was honored for his achievement by a law enforcement escort to the facility followed by a celebratory event with family, friends, and co-workers.

In attendance were Holland President Mike Naatz and Vice President of Operations Scott Ware who presented Warren with several awards for his achievement, including a commemorative plaque, a three million miler leather jacket and ring. His tractor now proudly displays the three million mile emblem.

Warren described the event as "the best day of my career." Over that long career, he said the key to his safety success has been simple -- patience, courtesy, and awareness.

Despite his 33-year career with Holland, Warren Clark shows no signs of slowing. He says that he looks forward to the day he reaches his next milestone--four million consecutive miles accident-free. 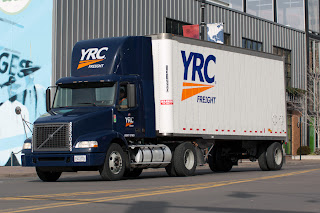 A piece of the World Trade Center has made its way to Healdsburg, California where it could soon become a small memorial in the town plaza.

The portion of a steel “I-beam” from the remains of the 9/11 attack on the twin towers arrived Monday afternoon.

Ben Gilliam, a former Healdsburg firefighter, requested the piece from New York City's Fire Department and arranged for its delivery.

“It means a lot to me. Every city in the country should have a piece of the World Trade Center,” Gilliam said Monday after the relic from the terrorist attack was placed into its temporary home — a display case at the Healdsburg Fire Department.

Gilliam is hoping to get city approval to install the metal piece in the Healdsburg Plaza, close to the gazebo and the American flag. It measures a little more than a square foot.

“He'll have to get permission and the right permits to put it in the plaza. I don't think it will be an issue,” said City Councilman Steve Babb, a retired Healdsburg fire captain.

Babb was present with a couple of dozen or so firefighters from Healdsburg and Windsor who helped escort the piece into town Monday, complete with a motorcade of four firetrucks and a police car.

“Watching it come down Healdsburg Avenue with the lights just touches my heart,” Babb said. “There's a lot of emotion in it.”

The piece was transported across the country for free by YRC Freight.

“It was quite the honor,” said YRC service center manager Tom Gidosh, who accompanied the piece on the final part of its journey from Benicia.


He said it was one of several other remnants of the destroyed World Trade Center that the company has transported to fire departments, including in San Bernardino and Pueblo, Colo.

As a physical reminder of the terrorist attack of Sept. 11, 2001, that brought down the twin towers, it will honor those who died, including 343 firefighters and 60 police officers who were killed in the Trade Center destruction, Gillian said.

Gilliam, who now works in fire logistics for the Sonoma County Fire Department, said the small monument he wants to create on the plaza is intended to celebrate the lives of all firefighters.

“They do the job whatever the risk is. There is always a fear of not coming home,” he said. 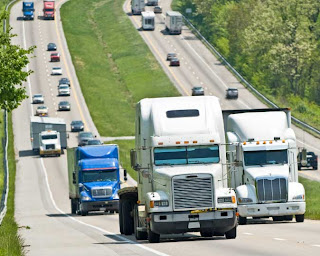 Despite a noticeable drop in truck tonnage in January, the U.S. trucking sector's recovery continues to gain momentum. According to the American Trucking Association's Chief Economist, Bob Costello, he is "optimistic about truck tonnage going forward... In fact, while many fleets said January was normal, they are also saying that February has been pretty good so far."

In late February the American Trucking Association (ATA) reported that its advanced seasonally adjusted (SA) For-Hire Truck Tonnage Index fell 4.0% in January after surging 6.4% in December 2011. "Last month I said I was surprised by the size of the gain in December... I'm not surprised that tonnage fell on a seasonally adjusted basis in January simply due to the fact that December was so strong," ATA Chief Economist Bob Costello said. Costello noted that December's increase was the largest month-to-month gain since January 2005.

Earlier this month YRC Worldwide Inc. announced the company has agreed to sell its interest in Shanghai Jiayu Logistics Co., Ltd. to its 35-percent joint venture partner. "This is another important step in the continuing process to sharpen our focus on North American less-than-truckload (LTL) shipping. Our emphasis on core LTL services has resulted in significant increases in on-time service and our customers are responding very favorably," said James Welch, chief executive officer of YRC Worldwide.

Arkansas Best Corporation, through its subsidiaries, engages in motor carrier freight transportation in the United States.

UPS, an official NCAA corporate partner and Connor Sport Court International, the world's leading manufacturer of high-performance sports flooring, today announced plans for a seven-city tour of the hardwood basketball court that will serve as the centerpiece of the 2012 NCAA® Men's Final Four®.
UPS also announced the launch of an exciting new multi-faceted marketing communications campaign to coincide with the tournament, focusing on game-changing plays that altered the course of college basketball history.

The Final Four will take place March 31 and April 2 at the Superdome in New Orleans. The championship court, which will be transported by UPS Freight, will begin its road trip on March 16 at UPS's hub in Columbus, Ohio. From there it will travel on March 17 to Louisville, Ky., one of the host sites for the second and third rounds of the men's tournament.

On March 19, the court will make a stop at the UPS Freight facility in Atlanta followed by Auburn University in Auburn, Ala., on March 20; the University of Southern Mississippi in Hattiesburg on March 21, and LSU in Baton Rouge on March 22 before arriving at its final destination in New Orleans on March 23.

UPS and Connor Sport Court have planned a wide range of entertaining events and activities at each stop, including photo opportunities with a replica of center court, a Final Four trivia game with collectible prizes and a shooting contest on a "backyard" basketball court provided by Sport Court. The events at the UPS facilities in Columbus and Atlanta will be exclusively for UPS employees, but the other court destinations will be open to the public. For more information regarding the itinerary for the 2012 Connor Sport Court tour, contact Jeff Morton at 801-712-6411 or jmorton@connorsportcourt.com.

"Logistics done right requires 'the three P's' - planning, preparation and precision - and it's the same whether we're delivering a critical medical device to a diabetes patient or the flooring for one of the most exciting college sports events of the year," said Ron Rogowski, UPS vice president, sponsorships and events. "It's a great honor for UPS to be entrusted with such an important responsibility and also to work with our friends at Connor Sport Court, who have done an amazing job creating the flooring for this year's tournament."

The court, A QuickLock portable system, was crafted by Connor especially for the 2012 Men's Final Four. It was constructed of northern hardwood maple in strict accordance with NCAA specifications. Connor Sport Court is a member of the Maple Flooring Manufacturers Association (MFMA) and adheres to the stringent grading and quality standards of that organization.

Connor Sport Court also is supplying the court for the 2012 NCAA Women's Final Four, which will take place April 1 and 3 at the Pepsi Center in Denver. The hardwood maple for the NCAA Final Four courts is sourced by Connor as rough lumber from about 60 different sawmills, most of which are located in Michigan and Wisconsin.

"We'll engage our new 'team members' in various ways to help us demonstrate that success in both the business world and on the basketball court requires a firm grasp of logistics," added Rogowski.
The campaign will include two new TV commercials, including one that highlights Christian Laettner's historic last-second game winning jump shot that propelled Duke University over the University of Kentucky in the East Region final of the 1992 NCAA tournament. "The Pass" will use actual game footage to illustrate the role that logistics played in setting up Laettner's successful shot, which is widely regarded as one of the most memorable plays in college basketball history.

Other elements will include videos featuring the four brand ambassadors, who will share their thoughts on various tactical innovations that changed the game of basketball including the fast break, the motion offense and the high post. The videos will run on March Madness Live on CBSSports.com where viewers can watch live broadcasts of tournament games online. In addition, the videos will be available for viewing on various social media platforms.
Posted by 1Teamster at 11:31 AM No comments:

YRC Worldwide Inc., continuing its efforts to shed assets not directly related to its core North American less-than-truckload business, said it has sold its 65-percent interest in Chinese trucker Shanghai Jiayu Logistics Co. Ltd., to its Chinese joint venture partner. YRC declined to identify the Chinese company or disclose terms of the transaction.

Prior to Welch's joining the company last summer, YRC sold its dedicated contract carriage business and virtually all of its logistics division.  Full Story.........