Ninety-nine linehaul and pickup and delivery drivers and dockworkers at USF Reddaway in Sacramento, California are now Teamsters, after the company recognized the workers through a card-check agreement. This marks the latest victory in the union’s card-check campaign throughout the West.

The card-check agreement, enabling this latest victory, was included in a contract that was ratified in August by workers at Reddaway terminals in California, Arizona and New Mexico. The contract was ratified 216-13 and covers approximately 400 workers.

The drivers and dockworkers in Sacramento, who joined Local 150, will be covered by the same contract that was ratified by the larger group of workers.

“Many of these workers had signed authorization cards months ago, but when USF Reddaway merged terminals, we had to restart the process,” said Jim Tobin, Secretary-Treasurer of the Sacramento-based Local 150. “The workers remained committed to becoming Teamsters, and now they will have a strong voice. We will provide them with strong representation.”

The company recognized the workers on December 5.
Posted by 1Teamster at 7:05 PM No comments:

USF Holland, an operating unit of YRC Regional Transportation, has accelerated delivery times between cities on 26 lanes. The lane pairs that have been upgraded to next-day delivery are:


"We are pleased to offer the advantage of a reconfigured network with faster service," said John O'Sullivan, President of USF Holland. "In addition, loading patterns designed for the direct transfer of goods mean that shipments are handled less and benefit customers by giving even better damage- free delivery performance," concluded O'Sullivan. "That's why USF Holland has one of the best claim ratios in the industry."

Customers look to USF Holland for reliable next-day delivery. With nearly half its lanes being served next-day, the company has more next-day lanes within its operating area than any other transportation company with comparable coverage. By re-engineering 2,500 lanes, USF Holland has attained a greater efficiency in moving, more shipments further and faster. This also allows USF Holland to provide greater flexibility to make pickups later in the day and still meet stringent transit standards.

"USF Holland has built its reputation on extremely reliable, claim-free next-day service," O'Sullivan continued. "Upgrading these lanes to next-day delivery is the most effective way for our customers to benefit from a 'USF Holland level' of service to and from America's Heartland."
Posted by 1Teamster at 3:07 AM No comments:

“If Congress won’t act to protect drivers on U.S. highways, the Teamsters will convince the court to do so,” Hoffa said. “American motorists shouldn’t have to pay the price for George Bush’s recklessness in pushing this program forward.”

Both the House and the Senate voted overwhelmingly to ban funding for the pilot project earlier this year. The bill—a spending bill known as Transportation-HUD—must still pass the Senate before it reaches President Bush’s desk.

Under the pilot program, only a handful of Mexican motor carriers are currently allowed to travel beyond the narrow border zone.

The Teamsters have continued the court battle to stop the program since unsuccessfully seeking an emergency injunction in September.

Joined by the safety group Public Citizen, Teamsters filed arguments on Monday with the 9th Circuit Court of Appeals in San Francisco. The brief responded to the Bush administration’s arguments. The Teamsters filed their first brief on Oct. 19.

“We filed hundreds of pages of legal arguments in the past few months that show the Bush administration broke the law in dozens of ways with this so-called 'pilot project,'” Hoffa said.

“Mexican trucks driving on our roads have to be as safe as U.S. trucks,” Hoffa said. “That’s the law. But the Bush administration just ignores the law.

“Drivers who would be disqualified from holding a U.S. commercial drivers license could still drive around the U.S. if they’re based in Mexico.

“Mexican drivers don’t have to comply with U.S. rules on how long they can drive,” Hoffa said. “.So someone could drive 10 hours in Mexico before arriving at the U.S. border and then drive another 11 hours inside the United States, even though U.S. rules don’t allow 21 hours of driving.

“I totally reject the argument that the Teamsters are against Mexican truck drivers,” Hoffa said. “We are against the companies that exploit them and the governments that don’t live up to their responsibilities to make sure the highways are safe.” 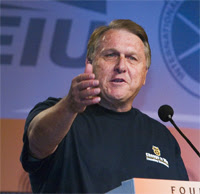 Teamsters General President Jim Hoffa said today that Congress has failed American workers with Senate passage of the Peru Free Trade Agreement.
The Senate voted 77-18 in favor of the agreement today. Last month, a majority of House Democrats voted against the agreement despite its passage.
"It is outrageous that Congress and the Bush administration have approved yet another job-killing trade agreement at a time when American families are seeing their jobs shipped overseas, their food and toys tainted, their wages decline and their houses foreclosed upon," said Teamsters General President Jim Hoffa. "Workers here and in Peru deserve better."
Hoffa also criticized President Bush for his remarks today calling for passage of the Colombia Free Trade Agreement.
"The model is wrong - it will not lead to job creation and it will hurt workers," Hoffa said. "Colombia also is the most dangerous country in the world to be a union member. More union members are killed there than in the rest of the world combined."
Hoffa said the Peru Free Trade Agreement is wrong for the United States because:
-- Foreign investors based in Peru will have the right to question our domestic laws and receive compensation if such laws undermine corporate profits.
-- Incentives are provided for U.S. companies to leave the United States under the investment chapter of the agreement.
-- The sovereignty of local, state and federal U.S. government bodies will be undermined. Foreign companies will be able to bypass "Buy America" laws.
-- Nothing will change for the 33,000 slave-laborers cutting down the Amazonian rainforest.
-- Subsistence farmers will be forced off their land because cheap U.S. food produced by agribusiness will undercut their prices. The same thing happened with the North American Free Trade Agreement, which resulted in millions of poor Mexicans leaving their farms.
-- According to some interpretations, Citibank will have the right to sue the Peruvian government if the country tries to reverse its disastrous system of privatized Social Security - thus allowing a powerful multinational to profit at the expense of the elderly, the sick and the poor.
"American workers are fed up with the consequences of our reckless free trade policies -- their good jobs vanishing," Hoffa said. "You can bet this is an issue that won't go away before next year's election."
Posted by 1Teamster at 12:45 AM No comments: