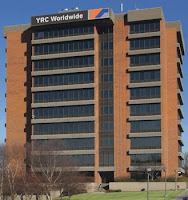 YRC Worldwide Inc. still isn’t ready to announce decisions about two of the biggest issues facing the trucking company — a new pension agreement with its union employees and a reverse stock split.

During a conference call to discuss second-quarter results Tuesday, YRC executives said that both issues were being discussed but that the company wasn’t ready to provide an update. Full Story.....
Posted by 1Teamster at 1:10 PM No comments:

TTS LLC, selects Holland as 2009 LTL Carrier of the Year

TTS LLC, one of the fastest-growing third-party transportation and logistics providers in the industry, has named Holland, a subsidiary of YRC Worldwide Inc., 2009 LTL Carrier of the Year.

In a recent ceremony, TTS presented its annual Carrier of the Year Awards to recipients in four distinct transportation categories including Rail, OTR, Drayman, and LTL.

To determine rankings, TTS rated its suppliers based on such criteria as on-time performance, ease of use, technology and revenue for the year from TTS. TTS agents and employees then voted to determine the winners.

"Service quality is a top priority for our team of professionals at Holland," said Jeff Rogers, Holland president. "It is an honor to be recognized by Total Transportation Services for doing what we have long considered to be the core of our business: providing an exceptional customer experience."

This marks the fourth time this year that Holland has been recognized for an exceptional customer experience. The company also has secured a 2009 Supplier Excellence Award for the fourth consecutive year from Eastman Chemical Company, a 2009 Regional Carrier of the Year Award from Echo Global Logistics, and a 2009 Carrier of the Year award from Hamilton Sundstrand Logistics Council.
Posted by 1Teamster at 12:51 PM No comments:

FedEx must stop blocking passage of the Federal Aviation Administration Reauthorization Bill so that key airline safety provisions and an important measure that would close the loophole that gives FedEx Express a special status are enacted, Teamsters General President Jim Hoffa said today.

"The Teamsters firmly believe that the final FAA Reauthorization bill must address the issue of fairness when it comes to FedEx's special treatment that allows it to treat its truck drivers as airline workers," Hoffa said.


Before adjourning for the August recess, Congress approved another extension of the FAA Reauthorization bill, this time through Sept. 30. The two senators from Tennessee, at the behest of FedEx, have been threatening a filibuster to block the provision in the bill closing the FedEx loophole.


"We are disappointed that FAA Reauthorization is once again delayed," said Teamsters Package Division Director and International Vice President Ken Hall. "As vital as the safety provisions are that were included in the extension, there are other important measures in the bill, including ending the unfair advantage that FedEx has in the package delivery industry. It's time for FedEx to stop blocking the bill. It's time for Congress to level the playing field and close the FedEx loophole."


The Express Carrier Employee Protection Act will end the special treatment that FedEx lobbyists won in 1996. The measure would establish one set of rules for all package delivery companies. The provision is in the House-passed version of the FAA Reauthorization Bill, which also includes important safety measures for the traveling public and the industry, and would create more than 125,000 new jobs each year.

May and June reports from the American Trucking Associations’ provide some unfortunate evidence that a national economic recovery is slowing.

According to the ATA, trucking serves as a barometer of the U.S. economy, representing nearly 68% of tonnage carried in 2008 by all modes of domestic freight transportation, including manufactured and retail goods. Trucks hauled 8.8 billion tons of freight in 2009. Motor carriers collected $544.4 billion, or 81.9% of total revenue earned by all transport modes. Full Story.....
Posted by 1Teamster at 12:37 PM No comments:

Shares dropped nearly 15 percent, however, as the carrier, which narrowly averted bankruptcy last December, said it still faced many challenges.

Last December, YRC, the largest U.S. trucking company handling smaller, or less-than-truckload shipments, negotiated a $470 million debt-for-equity swap with most bondholders. That allowed the company to restructure its finances. Full Story.....
Posted by 1Teamster at 12:30 PM No comments: