Trucking companies haul in a freight rebound in January 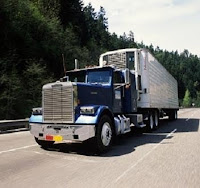 Freight conditions continued to improve in January, which saw the best year-to-year tonnage increase in five years, according to the American Trucking Associations.

The trade group said in a Wednesday release that its seasonally adjusted for-hire truck tonnage index rose 3.1 percent in January, building on a 1.3 percent gain in December. Compared with shipping activity during January 2009, the index leaped 5.7 percent, the largest year-to-year gain since January 2005.

The freight industry spent much of last year battling a freight slowdown that reflected the general recession and caused problems for numerous trucking companies, such as Overland Park’s YRC Worldwide Inc. The company came close to a potential bankruptcy filing before bondholders agreed Dec. 30 to swap a third of the company’s debt for a majority share of the company’s stock.

Bob Costello, the associations’ chief economist, said the January figures and isolated examples from various trucking lines show that a recovery in the industry is under way.

“While I don’t expect tonnage to continue growing as robustly as it did in January, the industry is finally moving in the right direction,” Costello said in a release. “Although there are still risks that could throw the rebound off track, the likelihood of that happening continues to diminish.”
Posted by 1Teamster at 3:46 PM No comments:

She saw an ad in the newspaper about a dockworker job at Roadway (which later became YRC), a freight company.

On February 26, Sanders is set to retire from YRC, becoming the first female dockworker for an LTL (less than truckload) freight company to retire as a member of Local 41 in Kansas City.

Over the years, a few other women in the male-dominated job became dockworkers at the Kansas City terminal, but none stayed long enough to retire.

“When I first got there, the guys didn’t like me, but that changed quickly,” said Sanders, 60, who operates a forklift.

“I became special to them because I was a woman. I always did my share of the work, but when I needed help I asked for it. I was never treated with disrespect.”

“We are proud of Jeanette’s accomplishments—she was a pioneer of sorts working as a dockworker in the male-dominated freight terminal,” said Vic Terranella, President of Local 41. “She is a hardworking, dedicated worker and a dedicated Teamster.”

“I love being a Teamster, it has given me so much opportunity,” Sanders said. “The wages and benefits in my Teamster contract allowed me to provide for myself and for my children.”

“I have always enjoyed talking about the benefits of being a Teamster to others,” she said.

Upon her retirement, Sanders said she will be volunteering at a home for children without families, a hospital and at the elementary school her granddaughter attends.
Posted by 1Teamster at 3:34 PM 1 comment:

YRC Worldwide Inc. said it had closed on the first tranche of a $70 million private-placement offering announced earlier this month.

The Overland Park-based trucking firm said proceeds from the new financing would go toward settling obligations to bondholders with about $45 million in 2010 notes. That group did not participate in YRC's $470 million debt-for-equity swap at the end of 2009.

The first installment of the private placement will be $49.8 million, with the remaining funds contingent upon the company concluding some legal issues related to the debt-for-equity swap.

YRC now has slightly more than 1 billion shares of common stock outstanding. The shares will undergo a reverse-stock split sometime in the first half of the year.

YRC closed at 37 cents a share in trading on Tuesday.
Posted by 1Teamster at 3:17 PM No comments: