Continues Successful Offering Introduced in May

YRC Inc., a subsidiary of YRC Worldwide Inc. announced the continuation of its successful "Confidence Delivered" service program. The program is designed for new customers and existing customers expanding their business with YRC. Introduced as a demonstration of the company's confidence in the performance of its integrated delivery network, customers signing on to the Confidence Delivered program may send five shipments anywhere within the YRC network, and if any of the five shipments is not delivered on-time, the customer receives the sixth shipment free.

"With the largest, most comprehensive network in the industry, the YRC team is confident that we will execute the 'Confidence Delivered' program for our customers with outstanding performance," said Greg Reid, Executive Vice President and Chief Marketing Officer for YRC Worldwide. "We're delivering on our promises and encouraged by the positive response from current and new customers."

The YRC network was created on March 1, 2009, when the company integrated the people, systems, facilities and equipment of the former Yellow Transportation and Roadway networks. The streamlined network is now the largest single "big shipment" network in North America with approximately 400 service locations.

"Since the integration, the new YRC network is delivering service reliability that exceeds the performance of the legacy Yellow and Roadway networks," said Mike Smid, President, YRC Inc. and Chief Operations Officer, YRC Worldwide. "We anticipate that our exceptional operations will not only attract new customers but previous customers will come back to experience the improved service."

Prospective customers interested in the Confidence Delivered program can call 1-800-610-6500 or contact their local YRC representative.
Posted by 1Teamster at 6:32 PM No comments: 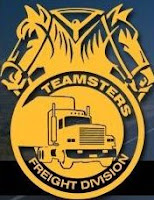 Union leaders representing staff at YRC Worldwide Inc. will meet Thursday ahead of formal talks on concessions with the U.S. trucking group slated to start June 29.

YRC Worldwide is the largest independent less-than-truckload carrier in the U.S., and has been forced to secure concessions from lenders amid sagging industry volume and multiple restructuring efforts.

International Brotherhood of Teamsters spokesman Galen Munroe told Dow Jones Newswires that union representatives will discuss YRC on an internal call Thursday, but declined to elaborate on the agenda.

The Teamsters agreed to $200 million in wage cuts in January, and further pay and pension concessions are expected to be on next week's agenda.

"I believe the call is probably going to be used to prep the rank and file as to what to expect heading into negotiations and letting them know how important prompt action is at this time so they can keep YRC a viable entity," said Dahlman Rose analyst Jason Seidl.

He said the Teamsters will have to agree to defer pension payments and will likely be aligned with other stakeholders in seeking to keep the company afloat.

"If they don't, I believe YRC will be out of cash within months, unless the economic environment changes," Seidl said.

He added that the union will likely request language in the contract that allows it to gain back things it gives up, "but that will probably be linked to financial performance."

The union said in a release Tuesday that it plans to begin negotiations next week to address YRC's short-term operating cash needs.

The Teamsters said the negotiations will take place at its headquarters in Washington D.C. and that it's also reaching out to other stakeholders, including pension funds and banks.

YRC said it hasn't announced it is engaged in discussions regarding changes to the national master freight agreement with the Teamsters.

"We do, however, maintain a continuous dialogue with our Teamsters partners to determine the best course and related action plans to successfully manage the business," the company said in an email to DJN.

Shares have been battered - losing nearly 90% of their value over the past 12 months - amid concerns about the company's debt load and ability to continue functioning.

Several analysts said shares could have gained Wednesday from short covering or other broad economic news, such as better-than-expected durable goods data.

Last week, shares were pummeled after the company reported plans to defer pension payments to its Central States, Southeast and Southwest Areas Pension Fund. It has been working to alter its pension obligations to conserve cash, which many analysts called an effort to avoid bankruptcy.
Posted by 1Teamster at 6:18 PM No comments:

YRC Worldwide Inc. today announced that it has finalized an agreement with the U.S. Army Reserve to work collaboratively to enhance job opportunities for soldiers and veterans.

Under the agreement formally known as the Army Reserve Employer Partnership Initiative (EPI), YRC Worldwide joins hundreds of employers throughout the U.S. pledging to work with the military to identify and hire qualified job applicants. As an EPI member, YRC Worldwide will provide postings of all applicable jobs to all 20 U.S. Army Reserve locations.

Jim Kissinger, Executive Vice President of Human Resources for YRC Worldwide, met with Army Reserve leaders in Kansas City, Mo., to sign the formal EPI agreement, and said it is an extension of outreach efforts already under way to hire veterans.

"We've hired a significant number of veterans, and we have found that military experience is a good fit for many of the opportunities we have," Kissinger said. "We've also found that the Army provides excellent training in the field of logistics and transportation."

Maj. Gen. Mari K. Ender, deputy chief, U.S. Army Reserve, said she was pleased to have the opportunity to establish enduring strategic partnerships with YRC Worldwide and other employers. "I look forward to collaborating with our newest valued partners to achieve mutual goals to attract, develop and retain a quality workforce," she said.

Since April 2008, more than 300 public and private employers have joined the EPI, including Fortune 500 companies, hospitals, industry associations, state agencies and local police departments.
Posted by 1Teamster at 10:56 AM No comments:

More cars sit idle in the driveways of the ranch-style homes on Bill Eller Drive in La Vergne.

The road ends in a small cul-de-sac, where three families know too well why the cars travel less.

They know because the men in those homes — the house at the end of the street and the ones on either side — fell victim to the struggling economy and lost their jobs.

Shayne Pulley, laid off in March, was first. A month later, neighbor Dan Johnson got a certified letter from his company with the same news. Three weeks ago, it was Garry Lawson who was let go.

"It's symptomatic of what is happening in the whole economy," Pulley, whose house is in the middle, said about his cul-de-sac. "It makes it seem like the more who are out of work, the less I feel like a failure. But I certainly don't wish it to happen to anyone else."

He and his neighbors joined the ranks of the unemployed in Rutherford County, where 9.2 percent of the work force was without a job in April, according to the most recent county numbers from Tennessee Department of Labor and Workforce Development.

Statewide, the numbers, released last week, jumped from 9.9 percent for April to 10.7 percent for May.

Every state and every industry has been affected by the economy, said Bill Fox, economics professor and director of the Center for Business & Economic Research at the University of Tennessee. Full Story.......
Posted by 1Teamster at 8:28 AM No comments:

Shares of YRC Worldwide Inc. dropped as much as 21% in a volatile session Thursday after the trucker reported plans to defer pension payments in what an analyst called part of an effort to avoid bankruptcy, though YRC said bankruptcy is not something it's considering.

YRC said in a release Thursday it reached an agreement with its pension fund to defer $83 million in payments. It also amended its credit facility to allow for the deferments. As of March 31, the company said it had $1.4 billion in total debt.

Stifel Nicolaus analyst David Ross said the news isn't really unexpected as the company has been doing whatever it can to raise and conserve cash.

"It's something else they're trying to stay afloat," Ross told Dow Jones Newswires, adding that whenever a company defers pension payments and does sale leasebacks, those actions are more of a "last-ditch effort."

"They're losing a ton of business, not making any money and trying to raise cash however they can, whether through deferring pension or selling real estate and leasing it back," Ross said. "The question is how long they can do this."

Chief Executive Bill Zollars told Dow Jones Newswires that bankruptcy is "not even on our radar screen" while acknowledging the pension changes announced Thursday are a short-term fix.

"The longer-term fix, we think, has to do with legislation to get the orphans off our payroll, so to speak," Zollars said, referring to the multiemployer union pension funds to which YRC contributes.

Zollars has long objected to YRC's financial obligations under the plans, saying that about half of its contributions pay for retirees who never worked for YRC but rather worked for other companies who have gone out of business.

Earlier this month, YRC said it wouldn't seek federal bailout funds, a move it had been considering to address its pension problems. Zollars said Thursday that the talk about applying for funds was mainly a way to "start the discussion" about multiemployer pension fund changes.

Zollars added that it's difficult to predict what kind of legislation could be introduced or passed but that he believes there's potential for changes.

"We think the timing is right for addressing multiemployer plans and single employer plans out there," Zollars said, adding that the company is working with a variety of people in a "fairly comprehensive approach."

The Blue Green Alliance, along with an array of labor unions and environmental organizations, said today that they oppose allowing heavier and longer trucks, including huge triple-trailer trucks, on the nation's highways. The coalition said they will work to pass a bill that would extend the "freeze" on truck size and weight to the entire National Highway System (NHS).

"The facts are clear: heavier trucks would be dirtier and would unnecessarily contribute to air pollution and global warming," said David Foster, Executive Director of the Blue Green Alliance. "The Safe Highways and Infrastructure Preservation Act will help prevent truck weights and lengths from increasing while taking action to improve the environment and make America more energy secure." Full Story.....
Posted by 1Teamster at 9:49 AM No comments: