The Federal Motor Carrier Safety Administration today released its final rule on truck drivers' hours of service. It extends the hours they can drive from 10 hours to 11 hours.

"We will continue to fight this dangerous midnight rule through the courts and through Congress," Hoffa said. "We're currently reviewing our legal options, especially since the court threw out this regulation twice."
The rule has been struck down twice by the U.S. Court of Appeals for the D.C. Circuit Court.

But in brazen defiance of the court and in subservience to the trucking industry, the Federal Motor Carrier Safety Administration (FMCSA) reinstated it as an interim final rule late last year.

"Letting tired truck drivers spend even more time behind the wheel is foolish and dangerous," Hoffa said. "I just hope this country can survive the last 61 days of the Bush administration as it goes into a frenzy of gutting public health and safety protections."

The percentage of fatal crashes that result from driver fatigue rose 20 percent in 2005 from 2004 - the first year in which the longer hours of driving were allowed.
Posted by 1Teamster at 2:57 AM 1 comment: 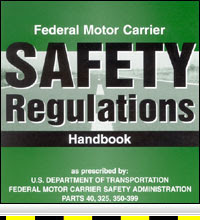 Government agency maintains 11-hour limit on truckers hours, instead of proposed change to 10

The Federal Motor Carrier Safety Administration on Tuesday maintained a regulation that allows truck drivers to stay on the road for 11 hours in a row, rather than a limit of 10.

In a conference call, administrator John Hill said that there was no evidence that safety of travelers is jeopardized by having truck drivers on the road for 11 hours.

Safety advocates say the industry is putting the public at risk by allowing truckers to drive too many hours.

The trucking industry's main trade group, the American Trucking Association, has been a proponent of maintaining the 11-hour limit, arguing that further limiting trucker's hours would have been costly and would have required the industry to retrain drivers and operating personnel, reprint logs, reengineer routes and make other changes.

A spokeswoman for the group said the ATA was pleased with the decision and noted that current safety rules, first established in 2004, have already resulted in safer highways. The ATA represents companies including UPS Inc. and YRC Worldwide Inc.
Posted by 1Teamster at 12:47 PM No comments:

YRC Integration Ahead of Schedule 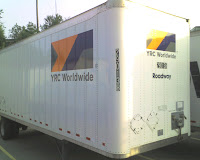 The integration of YRCW's two largest less-than-truckload subsidiaries is proceeding ahead of schedule, the company said Nov. 18. With support from customers and the collaboration of the Teamsters, more than 60 facilities nationwide are either consolidated or in the process of consolidation.

As the economy fizzles and demand slackens in the current quarter, Bill Zollars, chairman, president and CEO of YRC Worldwide, is calling on the transportation and logistics industry to focus on the future by pointing out the improved services and savings that will be achieved when the integration is completed.

"In this time of unprecedented economic challenges, our industry needs to focus on continually improving our efficiency and effectiveness," Zollars said.

The national integration for Yellow Transportation and Roadway is part of the company's program to improve operations and solidify its financial position. Strategic global growth, enhanced service offerings in the regional network and expanded communications are also part of the plan.

A deathbed confession by the murderer of Teamster union boss Jimmy Hoffa, on which director Martin Scorsese and actor Robert De Niro are basing a new film, has been acquired by Hodder & Stoughton.

Jack Fogg, editor at Hodder, said the deal for the true crime thriller I Heard You Paint Houses was for "a good five-figure sum". Hodder has Commonwealth rights, excluding Canada. A royal trade paperback edition is due out in March 2010, while the mass paperback will be released to coincide with the film.

Fogg said: "The book came around now because Scorsese and De Niro have just optioned the film rights, and they are going to do a big Goodfella’s-style Mafia movie in the next 2-3 years. We are publishing [the first edition] on the 25th anniversary of Hoffa’s disappearance, and then we’ll tie in the [mass] paperback with the movie."

The book, which was published in the US by Steer Forth Press in 2004, is written by former investigative lawyer Charles Brandt who "elicited the confession" from Frank Sheerhan, who claimed he had been ordered by the Mafia to kill Hoffa in 1975.

"At the time, Hoffa just disappeared, and years later Sheerhan said they cremated him so no one would ever find out," said Fogg. "Hoffa had been mouthing off about his Mob ties, and they obviously didn’t want him to, so they called in this guy, who was a really good friend of his."

Fogg said although only "true crime buffs" might be familiar with the story in the UK "in the States it is like ‘who killed Diana’", adding the film’s release would give the book "a boost" for this market.

Headline is planning to pitch the title as "upmarket true crime". Fogg explained: "As it was written by a lawyer, he threshes out the politics behind the slayings carried out by the Mob at the peak of their power. There are also implications Frank Sheerhan might have supplied the weapons for the Kennedy shooting."
Posted by 1Teamster at 12:39 PM No comments:

Many an ambitious, long-nurtured growth strategy will be abandoned during this rapidly worsening downturn. Bravely sticking to their original plans may ultimately make heroes of a few bosses, but in most boardrooms caution is now the watchword.

DHL, the overnight-delivery arm of Deutsche Post World Net, a logistics conglomerate, is a case in point. On Nov. 10 DHL said it would shut down its express-delivery service within the United States, with the loss of 9,500 jobs.

Five years ago DHL, which had been acquired by Deutsche Post in 2001, targeted the American market with much fanfare, eager to demonstrate that it was at least equal to the two delivery giants, FedEx and UPS. This was a crucial step in the campaign by Deutsche Post's boss at the time, Klaus Zumwinkel, to create a global "one-stop shop" for delivery. (The former McKinsey consultant stepped down in February this year after a raid on his home in Cologne, and on Nov. 7 he was charged with tax evasion.)

From the start, DHL found the American market far tougher than Zumwinkel was expecting; the recent savage decline in consumer spending was the last straw. FedEx and UPS were no cozy duopoly; they competed intensely, and fought DHL's every innovation. When DHL hired the U.S. Postal Service (USPS) to do its domestic deliveries, a move that was popular with customers, FedEx and UPS immediately followed suit. Full Story..........
Posted by 1Teamster at 11:12 PM No comments:

Federal Reserve index of manufacturers at its lowest level since it began 7 years ago.

Economic conditions in New York continued to deteriorate in November, with a survey of manufacturers in the region released Monday coming in at its weakest level in its seven-year history.

The general business conditions index, a part of the Federal Reserve Bank of New York's Empire State manufacturing survey, slipped 0.8 point to a reading of minus 25.4 in November from minus 24.6 in October. But the reading was better than the minus 26 reading that analysts surveyed by Briefing.com had expected.

The part of the index that measures the number of employees plummeted more than 25 points to -28.9, it's lowest level since 2001.

Looking ahead, the future general business conditions index fell 11 points to 13, with 40% of respondents anticipating improvement over the next six months and 27% forecasting a decline.

The New York economy has been hit particularly hard by the crisis on Wall Street. The state faces a $12.5 billion deficit next year, and Gov. David Paterson has called the legislature into session Tuesday to decide on cutbacks.
Posted by 1Teamster at 9:55 AM No comments:

Bill Zollars, Chairman, President and CEO of YRC Worldwide Inc. will deliver a company presentation at the Stephens Fall Investment Conference on Wednesday, November 19, 2008, at 10:30am ET. The conference will be held at The New York Palace Hotel, 455 Madison Avenue, New York, New York.