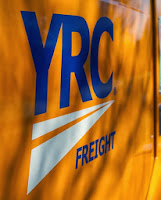 No capital left to reinvest after costs are met, debt is serviced, Welch says

The forbearance of YRC Worldwide Inc.'s unionized workforce is about to be tested again.

Tomorrow in Dallas, YRC executives will brief leaders of the Teamsters Union representing about 25,000 YRC employees. The meeting will cover the Overland Park, Kan.-based company's recent performance, its future prospects, and the need to prepare for the first of a round of debt obligations set to come due in 2014, the company said in a brief statement last week.

James L. Welch, the less-than-truckload (LTL) carrier's CEO, essentially outlined the meeting's agenda in a letter sent to employees Oct. 30. Servicing YRC's $1.4 billion debt load leaves the company with no money to reinvest in the business once wages, benefits, and regular operating expenses are paid, Welch said in the letter. YRC's lenders have told the company they will not agree to refinance its debt without, among other things, a new labor agreement that extends beyond the current compact's March 2015 expiration date. YRC's operational performance also needs to improve for its lenders to consent to a debt restructuring, Welch said.  Full Story.........
Posted by 1Teamster at 2:22 PM No comments: