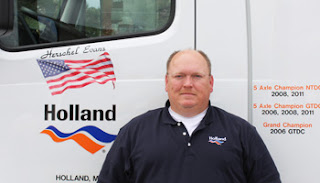 For the next two years, Evans will serve alongside industry colleagues as members of this group, a select team of 18 drivers with superior safety records whose mission is to educate the public about safe driving practices and the importance of the trucking industry. Captains share the industry’s message of safety, essentially and sustainability with the motoring public, news media, business and community leaders, public officials and their fellow drivers.

Evans is a two-time national driving champion, dedicated safety leader, and a tireless community volunteer. He has worked in the transportation industry for 24 years, the last 18 years with Holland. He is based at the Holland facility in Atlanta, Ga.

“It is a tremendous honor to have Herschel represent our company and our industry as an America’s Road Team Captain. He has proven himself to be one of the nation’s safest drivers and a Holland safety leaders. Herschel’s commitment to protecting himself and those around him makes him an ideal spokesperson for highway safety and the importance of the trucking industry,” said Holland President Scott Ware.

Evans won the state of Georgia’s 5-axle driving competition in 2012, 2011, 2008 and 2006. He earned two national titles with first-place finishes in the 5-axle class at the National Truck Driving Championships in 2011 and 2008. The Georgia Motor Trucking Association named Evans its 2012 Driver of the Year for his exemplary record of safe and courteous driving.

Active in his community, Evans participates in the Ride for Kids program, a motorcycle charity ride that benefits the Pediatric Brain Tumor Foundation. Evans participated in the Atlanta Ride for Kids in 1987 and has volunteered in leadership roles to organize the annual event since 1988.
America’s Road Team was created in 1986 by the ATA to represent the trucking industry and is sponsored by Volvo Trucks.
Posted by 1Teamster at 3:00 PM No comments:

For the fourth consecutive year, ABF® is listed among Training magazine’s Training Top 125, which ranks companies’ excellence in employer-sponsored training and development programs.

“ABF has a long-standing commitment to recruiting, training and equipping dedicated supply chain professionals,” said ABF President and CEO Roy Slagle.  “Backed by ongoing training support, ABF employees are given the power to serve the specific needs of a diverse group of customers. It is always gratifying to have our efforts recognized by a prestigious publication like Training magazine.”

Training magazine recognized the 2013 Training Top 125 winners with crystal awards and revealed
their rankings during a black-tie gala during the Training 2013 Conference & Expo at the Walt Disney
World Coronado Springs Resort. Now in its 13th year, the Training Top 125 is the only list that ranks
companies unsurpassed in harnessing human capital.

“Each year, Training Top 125 applicants raise the bar with the innovation, excellence, and effectiveness of their training programs,” said Lorri Freifeld, Training editor-in-chief. “The 2013 Training Top 125 winners continued that trend, providing performance-driven training responses to significant challenges and achieving compelling results that tied directly to corporate strategic goals. Congratulations to all the companies named to the 2013 Training Top 125.”

The Top 125 includes ranking based on benchmarking statistics such as total training budget; percentage of payroll; number of training hours per employee program; goals, evaluation, measurement, and workplace surveys; hours of training per employee annually; and detailed formal programs. Ranking is determined by assessing a range of qualitative and quantitative factors, including financial investment in employee development, the scope of development programs and how closely such development efforts are linked to business goals and objectives. 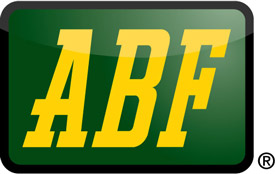 Following the acquisition of Panther Expedited Services, Inc. in June 2012, Arkansas Best saw yearly revenue top $2 billion for the first time in its history. In addition to Panther, Arkansas Best's emerging, non-asset-based businesses that contributed to 2012's revenue growth are in freight brokerage, and vehicle roadside and preventative maintenance.

Arkansas Best's fourth quarter 2012 net loss was $7.9 million, or $0.31 per share, compared to fourth quarter 2011 net income of $1.4 million, or $0.05 per share. This quarter's results include an after-tax charge of $2.4 million, or $0.09 per share, related to an actuarial adjustment to ABF's workers' compensation expense.  The liabilities associated with Arkansas Best's self-insured portion of these costs are estimates based on a number of variables and assumptions.  During the fourth quarter, information indicating that many of these claims had a longer duration and higher payments than initially projected resulted in a thorough actuarial review and in this adjustment.

"We are pleased with revenue growth and improving profitability at our emerging businesses as they added up to more than 20 percent of our total company fourth quarter revenue," said Arkansas Best President and Chief Executive Officer Judy R. McReynolds. "Expanding our portfolio of expedited and premium logistics services was a major initiative in 2012 as our customers' supply chains grow ever more complex.  We are encouraged by the trends we have seen in these businesses. Among other things, we added key sales and customer service personnel and invested in service-enhancing technologies, all of which were well-received in the marketplace."

McReynolds added that the full-year loss at ABF resulting in a 2012 operating ratio above 100, following a slightly profitable 2011, was troubling as total revenues remained about even with annual yield improvement offset by lower business levels. "We are focused on a return to profitability at ABF by substantially lowering our costs in the next labor contract through negotiations that are now underway. ABF's management team is hopeful it will reach an agreement with the Teamsters that allows us to preserve good-paying jobs and protect our employees' retirements through a lower cost structure that truly reflects the competitive nature of today's LTL marketplace."

In late December, ABF exchanged initial contract proposals with the Teamsters National Freight Industry Negotiating Committee. ABF seeks a national contract that eliminates the use of supplements and provides uniform terms for all of its local operations throughout the country. While previous versions of the National Master Freight Agreement ("NMFA") once covered more than 500,000 Teamsters, today, ABF is negotiating for its own contract that will cover 7,500 union employees. ABF is the only remaining union LTL carrier still paying full NMFA rates. Without significant reduction to this burdensome cost structure, ABF has informed Teamster leadership that extensive network changes will result, including closure of terminals and distribution centers.  Full Report.........
Posted by 1Teamster at 2:40 PM No comments:

YRC Freight announced that it has completed an agreement with Clean Energy Fuels Corp. to purchase four liquefied natural gas trucks to operate in Southern California.

The trucks will serve the Port of Long Beach and other surrounding areas.  The pilot project will leverage the Clean Energy fueling infrastructure in Southern California.  The LNG trucks will be operated by long-tenured YRC Freight drivers and results of the pilot will be analyzed by the company's maintenance, fuel and operations teams.

"We are eager to test natural gas trucks in the Southern California area and see how they perform within our network," said Jeff Rogers, president of YRC Freight.  "The LNG project will build on our sustainability initiatives, including our ongoing network optimization that is engineered to provide the highest quality customer service in the most efficient manner possible.  My thanks to the Clean Energy team for bringing their industry expertise to the table and helping to make this happen."

"We are very excited to partner with a leader like YRC Freight on their LNG truck pilot project," said James N. Harger, chief marketing officer at Clean Energy. "Through the benefits to their bottom line and to the cleaner air for future generations, we're confident that YRC Freight will become the latest enthusiast for natural gas as the fuel of choice."

YRC Freight has also been conducting a pilot project with diesel electric hybrids in the Northeast.  The company takes many actions such as speed limit restrictions, idling limits and the use of biodiesel to reduce emissions.  YRC Freight is a proud participant and charter partner of the EPA's exemplary SmartWay voluntary emissions reduction program and is a past winner of its Environmental Excellence Award.
Posted by 1Teamster at 2:27 PM No comments:

Bramwell and Conklin join an elite group of 18 Captains—million-mile, accident-free professional truck drivers—who are chosen to represent the industry and promote highway safety to motorists. For the next two years, they will travel the country speaking on behalf of the trucking industry to the community, news media and public officials.

"Byron and Don are true champions of safety and are among the best drivers in the business. We are honored that they are representing YRC Freight as Captains on America's Road Team," said YRC Freight President Jeff Rogers. "Their commitment to quality, unparalleled customer service and unmatched enthusiasm for the trucking profession make them remarkable ambassadors to the industry. We salute Byron and Don and thank them for their continued dedication to keeping our highways safe."

Byron Bramwell, based in Kansas City, Mo., has been a professional truck driver for almost 35 years and has been with YRC Freight his entire career. He has participated in 23 consecutive state driving championships and was named Mssouri Grand Champion in 2010. Bramwell actively trains and mentors young drivers and was a member of the Kansas Road Team.

Donald Conklin, based in South Bend, Ind., is a three-time Indiana Truck Driving Championship winner. With YRC Freight for 18 years, he has driven more than 2 million accident-free miles over the course of his 25-year career as a professional truck driver. Conklin is an active member of the company's safety committee and uses his experience to help others improve their safety skills.
Posted by 1Teamster at 2:23 PM No comments:

The company reported, on a non-GAAP basis, adjusted EBITDA for the year ended December 31, 2012 of $241.2 million, an $82.0 million improvement over the $159.2 million adjusted EBITDA during 2011 (as detailed in the reconciliation below).

"Our year-over-year operating improvement is primarily due to our focus on customer mix management, pricing discipline, productivity improvements, and a decrease in safety related costs," stated James Welch, chief executive officer of YRC Worldwide.  "In just 18 months after a complete restructuring of the senior leadership team, the company posted positive consolidated operating income for the first time in six years and exceeded our forecast for the year. Obviously, 2012 was a year of significant progress for the organization.  We eliminated all distractions that have been keeping this company from focusing on what we do best, which is providing premium services to both the regional and long-haul segments of the LTL market.  In 2013, we must continue to build on this momentum and execute against our strategic and operational objectives.  Our dedicated employees are driven to provide high-quality, consistent service to our customers and they are working hard to regain our position as one of the leading North American LTL carriers," said Welch.

"Our system-wide employee safety initiatives showed tremendous progress in 2012.  Collaborating with employee safety committees at terminals to drive cultural change from drivers to dockworkers, we are working more safely than ever before," stated Welch.  "We are continuing to experience a decline in the frequency of our workers' compensation claims while simultaneously settling more claims than are filed. The net result is the lowest number of claims on record since the company started tracking this information in 2000. With fewer claims, the associated liability has decreased, as have the letters of credit supporting those programs. It all started with a simple commitment to be the safest company we can be and our team is delivering in a big way," Welch said.  Full Report........