Mexican trucks may continue to operate widely in the U.S., under President Bush's interpretation of a new transportation spending law.

The Bush administration contends the law allows as many as 100 companies to go beyond a 25-mile zone inside the U.S. border, in a test program opposed by Congress and organized labor.

Under the funding law, the U.S. "will not establish any new demonstration programs with Mexico," the agency said.

Labor unions, including the Teamsters, and some in Congress have been fighting efforts to open U.S. highways to Mexican trucks since the 1994 North American Free Trade Agreement, citing potential job losses and safety hazards.

The Bush plan to continue the program is "directly in violation with the new law," said Bret Caldwell, a Teamsters spokesman in Washington. The law bans funding for the program and "for them to suggest otherwise is really spitting in the face of Congress," he said.

The law, signed by Bush on Wednesday, says none of the funds it allots may be used "to establish a cross-border motor carrier demonstration program." The Bush administration contends that doesn't apply to its program.
Posted by 1Teamster at 3:23 AM No comments:

Is it any less safe for a truck driver to be on the road for 11 hours than 10 hours?

The debate over the one-hour difference in “hours of service” has raged since 2003, and it doesn’t look to subside anytime soon.

Federal regulators two weeks ago reiterated a rule originally issued in 2003 that allows over-the-road drivers to work 11 hours followed by 10 hours of rest. Issued by the Department of Transportation’s Federal Motor Carrier Safety Administration, the ruling also preserved the provision that allows a driver’s workweek to restart after 34 hours of rest. That replaced the traditional weekend’s rest of two days.

In issuing its interim rule while awaiting public comment, agency administrator John Hill said the government’s data show that vehicle fatality rates fell to an all-time low last year. In addition, fatigue-related truck crashes in the 11th hour of driving have been negligible since 2003.

“This proposal keeps in place hours-of-service limits that improve highway safety by ensuring that drivers are rested and ready to work,” Hill said in a statement. “The data makes clear that these rules continue to protect drivers, make our roads safer and keep our economy moving.”

The American Trucking Associations, which represents big carriers like United Parcel Service Inc. and YRC Worldwide Inc., supported the agency’s ruling. The changes create natural rest and work cycles while giving the industry flexibility, according to the group. Full Story.....
Posted by 1Teamster at 11:27 AM No comments:

Amid fears of spending too soon or backing the wrong candidate

Retired dairy worker and Teamsters official Ed Sparks remembers the days here in Iowa when a race for president meant more than just campaign workers knocking on his door looking for support.

Representatives from his national union and others often could be seen trudging up and down the snowy sidewalks of small towns and cities in an all-out effort to get out the vote.

But this year, with only a few days to go until the Iowa caucuses Jan. 3, Sparks has noticed that that presence has precipitously declined.

"It's not as strong as it's been," said the 75-year-old retiree at a recent political rally. "I wish it was stronger."

Indeed, many unions' armies have thinned here this presidential season - and for myriad reasons.

Some have concerns about spending too much during the primary and having less money available for the general election. Others are waiting to see what happens in Iowa and New Hampshire before backing a particular candidate.

John Campbell, Iowa's political director for the United Steelworkers, which is backing former Sen. John Edwards of North Carolina, said labor has become cautious about early endorsements because so many backed Rep. Richard A. Gephardt in 2004 when he placed fourth in Iowa.

"After 2004, some of the other unions got gun-shy and just don't want to endorse this time around," Campbell said. "Not yet, anyway."

Campbell said he thinks some unions don't want to endorse a candidate now only to have to switch should the candidate fall short in Iowa or New Hampshire, as the American Federation of State, County and Municipal Employees did when it dropped its endorsement of former Vermont Gov. Howard Dean in 2004 in favor of Massachusetts Sen. John Kerry.

"Unions have always put up a lot of money, and they will this time," he said. "But some are looking at it that it is the White House that is the prize, not the nomination. So, they're keeping their powder dry for the end game and not expending their energies too soon."

Among the major unions so far sitting out of the endorsement race is the national Service Employees International Union, which has allowed local chapters to back candidates.

Neither the Teamsters nor the Ironworkers union has endorsed candidates, as they did four years ago.

Sen. Hillary Rodham Clinton has received endorsements from major labor groups, including the American Federation of Teachers and AFSCME.

While rival Sen. Barack Obama hasn't received much support from national unions, he has gotten the backing of some locals, including Illinois AFSCME, which endorsed the Illinois Democrat this month despite the national organization's backing of Clinton.

Roberta Till-Retz, a retired labor educator at the University of Iowa and now the communications director for the Iowa Federation of Labor AFL-CIO, said she thinks there is less national union involvement this time because the unions are satisfied with the quality of the Democratic field.

"People are happy with the candidates," she said. "The general sense is that we have a great crew of candidates and we want to wait for the general election before spending all our money."
Posted by 1Teamster at 11:15 AM No comments: 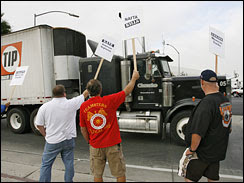 Teamsters General President Jim Hoffa today reminded the Bush administration that Congress ordered a stop to the pilot program allowing trucks from Mexico on our highways.

Congress banned funding for the cross-border trucking program as part of the omnibus spending bill passed Wednesday. The Teamsters fought the pilot project from the start because of real concerns that trucks from Mexico aren’t safe.

“We expect the Bush administration to stop this program in its tracks the instant the bill is signed,” said Teamsters General President Jim Hoffa. “However, the Federal Motor Carrier Safety Administration has shown over and over that it can’t be trusted to obey the law.

“If FMCSA doesn’t halt long-haul trucks from Mexico at the border, you can bet the Teamsters will be in court to stop them,” Hoffa said.

The Teamsters are already in court—the 9th Circuit Court of Appeals in San Francisco—to halt the cross-border truck pilot project. The spending bill only bans funding for the 2008 budget year, which ends Sept. 30.

“The pilot program was illegal in the first place,” Hoffa said. “Now Congress has made it absolutely clear that it would be lawless for FMCSA to continue it.

The case is expected to be heard in February.

Some trucks from Mexico have been allowed to travel beyond the narrow border zone since earlier this year under the Bush administration’s unsafe pilot program.
Posted by 1Teamster at 5:02 PM 1 comment: