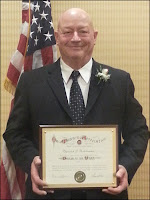 Don Robinson of our Cleveland terminal and a member of the inaugural YRC Freight Driver Hall of Fame last month was named 2012 Driver of the Year by the Ohio Trucking Association (OTA).

Don was chosen for the prestigious award from among 11 other individuals selected as OTA drivers of the month based on their high standards of professionalism and exemplary safety records.

Don has driven 3.7 million accident- and citation-free miles and joins a group of 31 drivers who have been named Driver of the Year by the association each year since 1981.

Don said there were no secrets to success as a professional driver and it was a waste of time to look for them. Success, he said, is simply the result of perfection, hard work, learning from failure, loyalty to the people you work for and persistence.

"Start each and every day with a positive attitude about life," he said. "At work, I present myself in a professional manner by being polite and friendly at all times. Before I leave on a trip, I focus my thoughts on highway safety.

"I have gotten my proper rest, done a thorough pre-trip inspection of the entire unit, as well as the paperwork involved, to make sure everything is working and in proper order. I believe safety is not just a word. It is a way to live and drive. Being courteous and polite at all times will help keep the roads and highways safe and, in turn, has made me a safer driver."
Posted by 1Teamster at 11:24 AM No comments:

In the Florida contest May 23–25, YRC Freight made a huge splash, winning the coveted team title with a first, two seconds and one third-place finish. Top performers were Henry Mahler, Ocala, first in the flatbed class; Robert McNiven, Boynton Beach, second in straight truck; and Robert Boughner and Jeff Slaten, Tampa, second and third, respectively, in the 3-axle class.

One of the more dramatic venues was in McClellan, Calif., on May 18–19, which combined the Northern California regional competition and state finals on the same weekend. Thirteen YRC Freight drivers competed, and Arty Crandall, Santa Rosa, Jerry Jordan, Tracy, and Ray McNamara, Santa Rosa, finished one-two-three, respectively, in the 5-axle class on Saturday. The top three finishers from each regional in each class qualified for the state finals on Sunday and a shot at winning the first-place trophy and a berth in the nationals.

Suspense was high as contestants, friends and family members gathered around the announcer's booth at the conclusion of competition as the final results were tabulated.

The first name to be announced in the 5-axle class was Arty as the third-place winner, followed by the name of a driver from another company in second. That left Jerry and Ray in the running for first place. When Jerry's name was announced, he and other members of Team YRC Freight were elated.

Elsewhere, Larry Mentor and James Vatter of the Westbrook, Maine, YRC Freight terminal were among 70 competitors in Maine. Larry, a regular competitor who has helped raise interest in the driving championships among fellow employees, finished first in the twins class.

Among the supporters cheering them on were Rita Vatter (James' wife), three other drivers from the terminal, and Dana Giles, terminal manager.

In Georgia, Kevin Dean, an Atlanta pickup and delivery driver who has competed each year since 2003, came through with flying colors, winning his fifth state title in the last four years.

Kevin said he didn't see his final score but knows he scored on five of the six problems on the driving course, something no other competitor in his class was able to accomplish. He scored 62 of 80 possible points on the written exam and 90 of a possible 100 on the pre-trip inspection.

"The state competition has shown me that I need to work on the written test even more," Kevin said. "I will be doing that for nationals where I have to be at my absolute best. The nationals is where I will meet the 49 other state first-place winners, so there will be little rest for me over the next three months."

The other YRC Freight driver to qualify for nationals is Jude Hurst, Louisville, Ky., who finished first in the twins class in Kentucky.

In addition, 10 YRC drivers from Texas will compete in the state finals June 14–15 at Bryan/College Station by virtue of placing in the top two in their class in one of four regional qualifiers.
Posted by 1Teamster at 11:20 AM No comments: