For the third time, workers at UPS Freight in Kansas City overwhelmingly handed a fly-by-night organization claiming to be a labor union its walking papers in a vote yesterday.

Workers voted 157-58 against the Association of Parcel Workers of America, which according to recent filings with the Labor Department, is now insolvent.

"We are not surprised that this sham labor union was defeated for a third time in Kansas City," said Ken Hall, Director of the Teamsters Parcel Division and Teamsters Vice President. "They have been defeated in every terminal they have attempted to represent because UPS Freight workers have seen through their false promises."

The organization is run by two UPS workers who employ a union-busting attorney as their legal counsel. Neither of the two UPS workers have ever negotiated a contract or even represented workers as stewards.

"Once again, the workers at UPS Freight overwhelmingly showed that they can't be led astray by this organization's empty claims," said Ralph Stubbs, President of Teamsters Local 41 in Kansas City.

To date, more than 11,000 UPS Freight drivers and dockworkers in 40 states have signed cards to become Teamsters, the largest organizing victory in the freight industry in 25 years. More than 9,900 of these workers have already ratified a new contract which improved wages, benefits and working conditions.
Posted by 1Teamster at 7:54 PM No comments:

Air Transport Services Group, formerly ABX Holding, plans to step up efforts to find customers other than its largest one, DHL, and to redeploy its aircraft among them.

The company hosted a conference call and Webcast on Tuesday morning to discuss with investors their current status and plans for a post-DHL environment.

Since May 28, when DHL made public its attempts to secure a deal with UPS to take over its domestic U.S. air network, the fate of ATSG has been in doubt. Public officials in Wilmington, Ohio are trying to stave off the closing of the DHL hub there and the loss of more than 6,000 jobs. ABX Air has offered to rewrite its contract with DHL to make the switch to UPS unnecessary. ATSG stock was selling at 96 cents on Monday. A year ago, the stock was trading at approximately $7.50 per share. On Tuesday, the Russell 2000 Index dropped ATSG from its small-cap listing.

Joseph C. Hete, president and CEO of ATSG and CEO of ABX Air, said during the Webcast that for the past five years, ABX has been developing a diversified customer base for their fleet of fuel efficient 767 aircraft. The company flies for the U.S. military and the Postal Service.

Quint Turner, CFO, said the company has a strong financial base with strong cash flow from non DHL businesses. The DHL business is a lower margin operation than other contracts, and ABX expects to provide ACMI leases to other customers who will give a better return on the capital investment, Turner said. He did not say how many planes the company can reasonably expect to redeploy within the next year.
Posted by 1Teamster at 10:45 AM No comments:

It's been a few weeks since Brian Vickers was strapped in a Braun Racing Toyota, (a pole run and a top five finish at Lowes), and over the next few weeks, Brian will be back in the car for a few races in the No. 32.

Vickers is scheduled to be in the Braun Racing #32 Dollar General Camry at Daytona on July 4th, and then the following weekend in Chicagoland. The race in Chicago is particularly important as Dollar General is the title sponsor of the event. In the month of August, you will be able to spot Brian in the ABF Camry at the Michigan, Bristol, Fontana, and Richmond events.
Posted by 1Teamster at 8:41 AM No comments:

U.S. private employers slashed 79,000 jobs in June while planned layoffs at U.S. firms rose nearly 50 percent above year-ago levels, according to data that may spell bad news for a government payrolls report this week.

Wednesday's data brought some brighter news as well, however, with a boost in demand for aircraft lifting new orders at U.S. factories by an unexpectedly large 0.6 percent in May.

Late payments on U.S. home equity lines of credit, however, rose to a 21-year high in the first quarter, given continued housing market stress and weakness in the economy, the American Bankers Association said.

On the labor front, private-sector employers' decisions to cut 79,000 jobs in June made for the largest decline since November 2002, according to a report by ADP Employer Services. Complete Story.......
Posted by 1Teamster at 5:53 PM No comments:

YRC Worldwide Inc. will host a conference call for shareholders and the investment community on Friday, July 25, 2008, beginning at 9:30am ET, 8:30am CT. Second quarter earnings will be released after the market close on Thursday, July 24, 2008.

The conference call will be open to listeners through a live webcast via StreetEvents at streetevents.com and via the YRC Worldwide Internet site yrcw.com.

An audio playback will be available after the call via the StreetEvents and the YRC Worldwide web sites.
Posted by 1Teamster at 8:46 AM No comments:

Petitions turned over to DHL 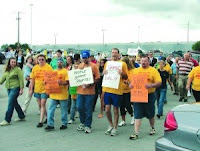 During a march Monday morning at the DHL Air Park to speak out against a planned massive elimination of jobs at the facilities, about 250 people shouted chants in unison, including these repeated passages: “What do we want? Keep the jobs! When do we want them? Now!”

The group walked from the Teamsters Local 1224 parking lot to the DHL Administration Building to deliver copies of petitions containing more than 9,300 signatures of people calling on DHL’s parent company to preserve thousands of Wilmington-based jobs.

After the group entered the lobby with the stack of petitions, ASTAR Air Cargo Capt. Joe Teuchert, a part of the Save-the-Jobs Community Coalition, said, “We’d like to talk with the most senior manager here.”

A man with DHL security said, “You got him right here,” referring to himself.

Teuchert said the group would like to present him with the petitions and wanted them forwarded to the CEO of DHL’s parent company in Germany, Frank Appel of Deutsch Post World Net.

“We’d like you folks to reconsider your options of taking this DHL/UPS deal,” Teuchert said to the security guard.

The security worker, who presumably faces a possible job loss as well, said he would be more than happy to accept the petitions and have them forwarded.

When reporters asked why a member of DHL’s management staff in Wilmington did not accept the petitions or be there to respond to the “Save the Jobs, Save Our Communities” petitions, they were told to contact the communications office of DHL Americas in Plantation, Fla.

Before leaving the building, several protest participants gave brief statements on the Deutsch Post plan to take away an immense number of jobs at the air park.

If the restructuring plan is carried out as outlined in the May 28 Deutsch Post announcement, there is expected to be a direct loss of at least 7,400 Wilmington-based jobs.

By late Monday afternoon, the number of petition signatures had grown to 9,600, said Mark Dimondstein, who is a field organizer with the American Postal Workers Union and a part of the Save-the-Jobs Community Coalition.

The majority of signatures, he said, were gathered at small businesses in the area where proprietors placed them near the cash register or other conspicuous spots.
Posted by 1Teamster at 7:42 AM No comments:

The cargo delivery company DHL has said it would consider donating its entire Wilmington freight hub operation to the community if the company concludes a business deal with United Parcel Service that could wipe out thousands of Wilmington jobs, U.S. Rep. Mike Turner and a state official said Monday, June 30.

Turner, R-Centerville, spoke after meeting privately with employees of ABX Air, the DHL-employed cargo airline that could be replaced by DHL's proposed contract to have UPS handle all of DHL's U.S. air cargo transport. DHL said it expects to negotiate the deal within three months.

"I think DHL is making a terrible mistake," Turner said of the proposal.

Kevin Carver, an Ohio Department of Development regional official based in Dayton, confirmed that DHL has said in conversations with top state officials that it would consider publicly donating the 2,200-acre Wilmington property if the UPS deal goes through, in order to help Ohio find new use for the operation. The property includes two runways, control tower and dozens of buildings, including more than one million square feet of cargo sorting space. DHL's two contractor airlines at Wilmington, ABX Air and ASTAR Air Cargo, fly DHL overnight delivery packages to cities across the United States each night. Full Story........
Posted by 1Teamster at 9:24 PM No comments:

‘Restructuring’ puts people on the streets

The deepening crisis in the airline industry claimed its latest victims recently with the announcement from DHL Express that it would close the Wilmington, Ohio, hub and that it would partner with United Parcel Service to contract out its North American airlift operations.

Up to 6,000 workers, including pilots, sorters and maintenance technicians will be affected in the Southwestern Ohio region. The majority of these layoffs will take place at ABX Air and ASTAR Cargo.

They currently contract with DHL for airlift and sorting operations.

DHL Express is a subsidiary of Deutsche Post, the German Post Office. DHL Express has operated at the Wilmington hub since it acquired Airborne Express in 2003 and has struggled financially to compete with UPS and FedEx. Indeed, DHL Express only has just over two percent market share of the domestic cargo industry but on a worldwide scale it has more of a foothold and is considered a major player.

Under the proposed ten year, $10 billion pact between DHL and UPS, DHL will restructure its domestic network by closing a quarter of its regional sorting hubs and terminals. UPS will now be the single airline for transport of DHL’s North American express and international shipments.

DHL will also contract out some of the rural deliveries to the United States Postal Service and consolidate smaller terminals into larger single facilities.

The majority of DHL’s delivery drivers are represented by the International Brotherhood of Teamsters who recently ratified a new five year national contract.

The impact of the restructuring plan on the Teamsters will be minimal as compared to the ground crew and pilots at ABX Air and ASTAR.

The workers who will be affected get the least attention in all the press releases and media coverage. Elimination of hundreds of thousands of jobs, and worsening conditions over the last two decades demonstrates the irreconcilability of interests between those who labor in the airline industry and the top managers, billionaire investors and Wall Street speculators who control it. In the age of globalization, as airlines such as DHL restructure due to overcapacity and a deepening world economic crisis, there will be more attacks on airline workers. Labor unions, especially in the United States, need to start thinking on a global scale and forge alliances with workers internationally.

Workers are already under stress due to having loved ones overseas fighting in Iraq and Afghanistan. They are under stress from rising fuel costs and from the mortgage crisis. A restructuring plan from their employer should not add to their problems.

Armed with a Marxist insight into this war on workers and, by uniting as a class to fight for socialism, we can end the flaws of capitalism including overcapacity, overproduction, the boom and bust cycles of Wall Street, environmental destruction and war.

Doug Smiley is a delivery driver and a Teamster.
Posted by 1Teamster at 9:20 PM No comments: